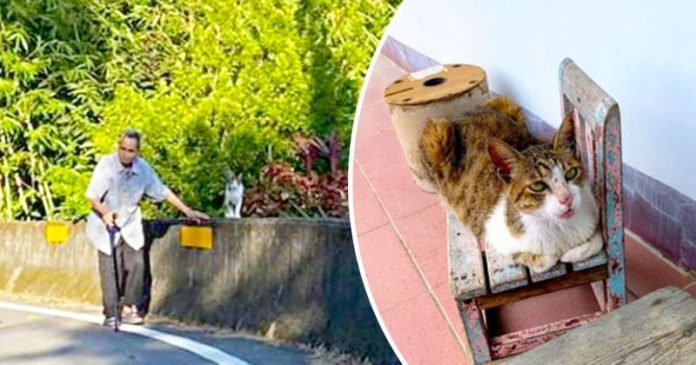 If a cat loves its master very much, then it will dedicate its life willingly to sacrifice anything for the rest of its life. The meaning of a cat’s love and dedication to its master is very touching. This is a story of a 15-year-old cat who accompanies a 97-year-old man for 3kms. to visit his dementia-stricken wife.

Pan Shuhua, the owner of a 15-year-old cat named Xiao Ke, said, initially the cat was a rescued stray cat. After 15 years, it turns out she is a protective cat who dedicates her entire life for the sake of the family. Xiao Ke is very cheerful and friendly. Most impressively, she will faithfully protect and accompany the grandfather of the family who is now 97 years old.

This loyal cat is often seen with the grandfather whenever and wherever he goes. The obedient Xiao Ke would follow behind her grandfather to protect him, and the two are inseparable.

Pan Shuhua shared the story one day when his elderly father-in-law suddenly remembered to go out looking for his wife, and the whole family became worried because he had gone out without telling them. Then he was surprised to see Xiao Ke accompanying the grandfather home. The whole family was relieved and thankful that he returned safely, with the help of Xiao Ke who was always by his side to ensure his safety.

Pan Shuhua said his elderly parents-in-law living in Miaoli are happy. On that day, his father-in-law suddenly remembered his 89-year-old wife but she now lives in a nursing home due to dementia.

“My father-in-law had walked up to 2 kilometers without telling the family,” Pan said.

Since his father-in-law could not walk well, he was fortunate to have Xiao Ke accompany him on the way home.

Pan said when he found out his father-in-law was missing, everyone in the house became worried and panicked. Then they were relieved and moved to see the cat come home with him. Xiao Ke followed and protected her grandfather on the way back, and forth, for 2 to 3 kilometers safely.

“Traveling one or two kilometers is very difficult for the elderly, and they need 2 to 3 hours to walk. When my father-in-law came home, he just smiled and said, ‘Fortunately, there is this cute little one accompanying me, otherwise, maybe I could be very confused…’,” added Pan.

Since the grandmother was at an elderly home, and the children went out to work, Xiao Ke’s relationship with the grandfather grew stronger.

While laughing, Pan Shuhua told of Xiao Ke’s habit of always worrying about her grandfather’s safety, “Every time my father-in-law went out for a walk, Xiao Ke would be by his side along the way. Sometimes my father-in-law goes to take a shower and she waits for him at the bathroom door and patiently watches him until he finishes washing before she can go out and do her own thing. Starting early winter this year, when my mother-in-law was not at home, Xiao Ke became the sleeping companion of my father-in-law. They are always together. ”

Datuk has now become the main master of Xiao Ke. Pan Shuhua felt his original decision to adopt and care for Xiao Ke was just right.

“Actually, I am the real master of Xiao Ke. Later, I left her at my mother-in-law’s house because I saw her and my father-in-law loved Xiao Ke very much. I didn’t want to break their hearts, so I left her there. But now I think, it’s good that Xiao Ke lives in that house with my father-in-law. His life is happier because she can accompany him in the Miaoli Mountains,” said Pan Shuhua.

Hopefully, the grandfather and his beloved cat will continue to stay healthy and have long lives together.