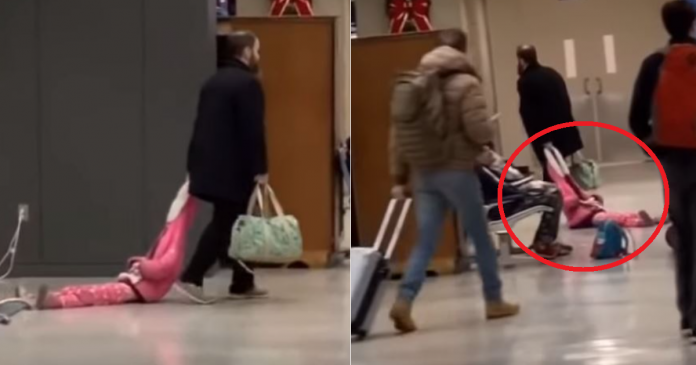 Children may be innocent and cute, but when their tantrums strike, there is just so much that we can bear. Although there are parents whose patience is beyond compare, getting physical or spanking the kids is never a solution for discipline.

In 2019, a passenger saw such a hilarious incident at Washington Dulles International Airport in the United States. A little girl about 4 years old started to have a tantrum, although the reason was unknown. She just lay on the floor and refused to accept what was troubling her. The father beside her did not know how to comfort her when she was lying down on the floor and refused to walk…

Seeing that the boarding time was just a few minutes away, the dad, who didn’t want to put effort into coaxing his little daughter, simply kept his calm. He grabbed the little girl’s hood of her pink coat in his left hand, held the carry bag in his right, and dragged her away like carry-on luggage. The father walked through the airport lobby with his daughter like this, creating such a funny scene. 😂

The man who recorded the video said that when he was helping his girlfriend board the plane at the airport, he suddenly heard the sound of heavy objects being dragged on the floor. As soon as he turned his head, he saw the exhausted father, and he was dragging his daughter while carrying another heavy luggage. The little girl was also very stubborn, and she was still very angry with her father during the whole process!

As though this was not hilarious enough, the little girl’s older sister is also following behind, but from a distance. Compared with the stubborn little girl, the older sister not only dragged her own luggage by herself but also carried her sister’s backpack, a scene that may be a little too embarrassing. The sister deliberately followed her father and sister at a distance, obviously not only because of embarrassment, but acted as though they do not recognize each other. 😂

The man who was filming finally followed the family and found that the little girl was still reluctant to get up until the boarding gate, and his silly incident made him laugh so hard. After watching this video, a large number of netizens also said, “My dream when I was a child was to be dragged on the ground.” And some people asked, “The coat is of good and sturdy quality, what brand is it?” The discussion was very lively.

The father from America was not the only one who has encountered this kind of incident with his child. In the past, a Canadian dad took his 2-year-old daughter home. The daughter was either too tired or lazy. After getting out of the car, she lay on the ground and didn’t move!

The father in the photos seemed to be used to his daughter’s erratic behavior. Instead of making such a fuss, he calmly carried the daughter’s bag in one hand and lifted the 16-kilogram daughter in the other. The process was effortless! The daughter is very quiet, so she was calmly taken away from the ground by her father. Seems like this is the daily routine of the father and his daughter. 😂

Perhaps, both the father and the daughter have been doing this silly incident for the longest time. The daughter can do whatever she wants, and the dad can always take it hilariously. After reading the article, many netizens have wondered how they can deal with a daughter like his. 😂😂

Here are the videos of both fathers with their hilarious daughters:

All fathers are different, but most of them encounter offspring with capricious characters. I wonder how they deal with them?