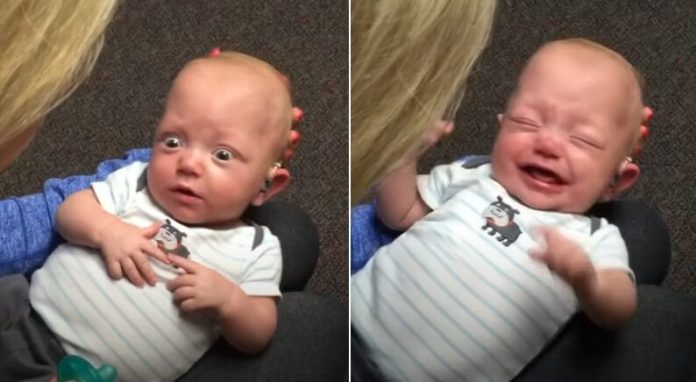 It breaks every mother’s heart to discover that their baby was born without being able to hear. Apparently, advanced technologies have released hearing aids suitable for infants, the baby who heard her mother’s voice for the first time since birth was stunned.

Unbelievable, thrilling, beautiful, heartwarming. The baby’s expression, mixed with all kinds of emotions, touched the hearts of many netizens.

The male infant was born with a disability and could not hear any sounds, so the doctor carefully fitted the hearing aid and tried to make him hear for the first time.

The baby, struggling, crying, and stunned at the device placed in his ear, suddenly began to hear a sound, and his eyes widened with surprise.

He was bewildered by the sounds he heard for the first time since he was born.

“Baby. Can you hear your mommy’s voice?”

When the mother spoke to the baby, he was surprised and burst into tears. The scene was very touching.

As his mother warmly hugged and reassured him slowly, the baby gradually focused more on the sound. As he looks in the direction in which the sound is coming from, he smiles and enjoyed every thrilling moment.

A few minutes later, the baby laughed at the person talking to him. How amazing is that! Happiness filled his mother’s face as she looked at her happy baby.

The video containing this touching moment is being released through various YouTube channels, catching the attention of netizens around the world.