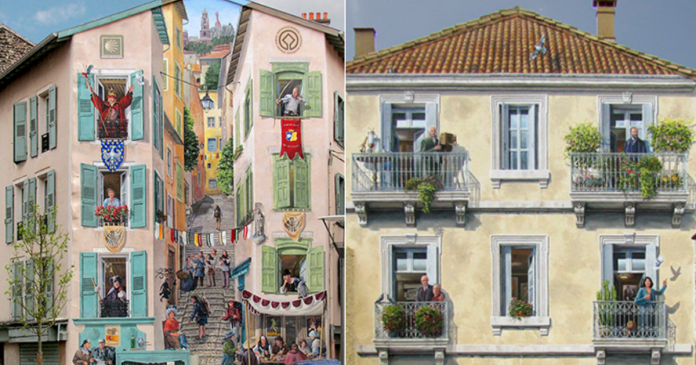 Many foreign buildings are painted with exquisite hand-painted graffiti. The unique public art makes ordinary building walls more colorful and adds a lot of fun and joy to the unchanging monotonous scenery!

French artist Patrick Commecy and his team specialize in painting on blank walls around the city. His works are not just traditional graffiti, but a combination of various designs depending on the shape and location of the building, creating a unique 3D-style mural!

Patrick will first select the blank walls in the city. After acquiring the consent of the owner, he will refer to the appearance of the original color of the building and use the same tone as the base. Then he will use 3D techniques to create visual illusions, paint realistic windows and balconies, on which there are cute characters of sorts, people performing their duties, and the joyful atmosphere makes the whole street looking super-dynamic!

Through his superb perspective technique, Patrick has also made the narrow streets look wider. Even the sea and stone bridges in the distance were done perfectly! The entire block of space looks much larger.

The ordinary window turned into a frame of oil paintings, and the old man stepping on the ladder also dropped some frames. 😂

The coffee shop around the corner is full of people, but in fact, even the residents in the wooden windows upstairs are only part of the painted mural!

If you have not taken a closer look, you will never realize that all the windows on one wall are fake!!

After removing the advertisement billboard, the wall became a fresh blue shop, and the street scenery became more romantic in an instant.

This 3D painting looks very realistic! It looks as though the printed characters on the wall are all hanging. 😂

The colorful murals add dreams and happiness to the city.

(There is also a Lightning McQueen hidden in the entire row of parking lots!!)

Even the reflected light and shadow of the glass windows are painted perfectly.

The expressions and gestures of each family are meticulously done, and even the bird and its shadow are painted!!

Tourists who have seen the murals first-hand wished that they could see 3D graffiti in their own country. They are such beautiful sights to see. ❤️