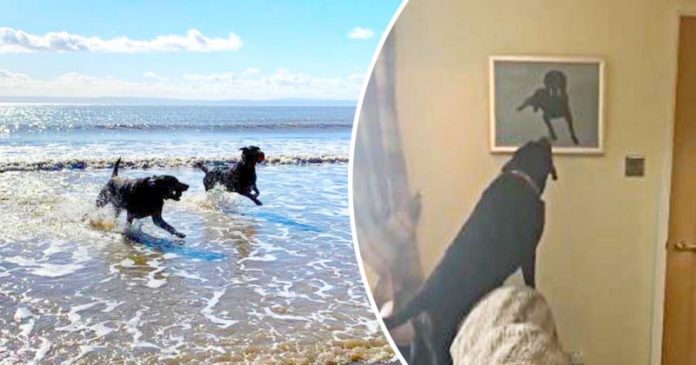 The passing of a beloved pet will surely break an owner’s heart, especially if they have been with the family for many years. Animal lovers admit, when a pet has passed and another one was replaced, it just isn’t the same. Apparently, the departure of Smiff, a dog that makes his family happy, really affected his owner Libby Davey, as well as his younger brother, Frank.

After Smiff’s death, Davey decided to order a portrait painting of Smiff to hang on the wall of the house. Much to her surprise, it turns out that the decision not only pleased herself but also pleased Frank who clearly missed his brother.

When the painting has arrived, Davey immediately hangs the picture on the wall, and she was shocked to see Frank’s reaction as soon as he saw the painting.

“I think Frank knew that the painting was a picture of his brother,” Davey wrote.

Here is the Facebook Watch link to the video of Frank’s reaction to his brother’s photo hanging on the wall.

Frank clearly could not hide his joy and longing when he saw the portrait of his beloved brother.

Although Smiff is no longer with the family, he will always be loved and remembered forever.

This squirrel keeps tapping the window of this family’s house for...