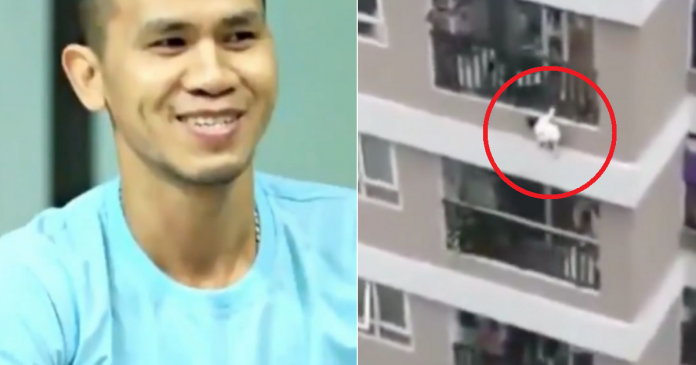 31-year-old Manh, a delivery truck driver has rescued a 3-year-old toddler falling off a 12th-floor balcony, and people who witnessed the incident hailed him a hero, capturing the hearts of netizens who have seen the video shared online. The video instantly went viral and was shared by many.

According to Manh, he was sitting in his truck when he heard people outside screaming. When he went out to see what the commotion was about, he looked up and was shocked to see a toddler dangling from a 12th-floor balcony.

Manh acted quickly and wasted no time to come to the rescue. He immediately climbed the shaky metal roof where the toddler was supposed to land and caught her in the nick of time.

He later shared the incident in an interview:

“I scaled the wall and saw that she could fall onto the metallic roof of the house used to store electric generators for the complex, so I tried to climb on top of it. I made it, but couldn’t stand firmly, as the roof was crooked.”

Nguyen Ngoc Manh was instantly called a hero after the incident. He literally sprang into action and caught the toddler before she landed on the roof.

Manh was a father himself and said: “She looked so much like my child at home. I was so confused, only able to tell her, ‘Please, please, I’m here now.”

The toddler was immediately brought to the nearest medical facility and was treated for a broken hip, but no other injuries. Manh, on the other hand, had sprained his arm from catching the child.

“I didn’t think about it much back then, but now I’m happy about doing something meaningful. After saving the girl, I left without leaving a phone number, though the girl’s family managed to contact me anyway to inform me of the girl’s health status,” he also said.

Here is the video of the incident:

Heroes and angels will come to you at the right time if you just believe.