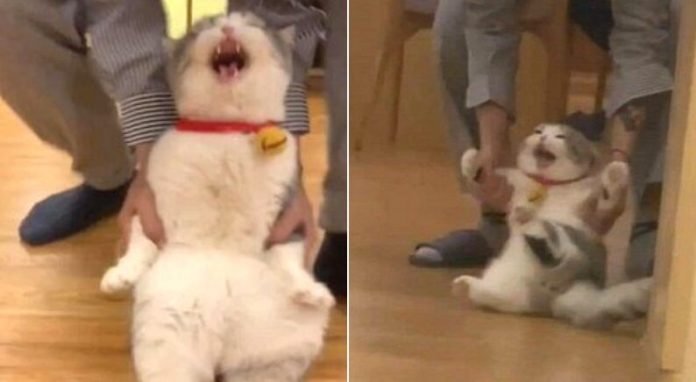 Recently, on various online communities and social media, two photos were shared under the title of ‘a cat who was forcibly arrested while eating at a family dining table.

In the picture, the cat is caught by the guardian’s hands and dragged away from the table.

At that moment, he screams and fits into a rage while being dragged away…

The guardian pulled him a little further away due to the cat’s extreme resistance.

However, he was struggling all the way and showed a resentful expression.

His ears tilted back, his eyes tightly closed, and his mouth open wide enough to let out a scream. His chubby paws were held tightly by the guardian.

The netizens who have seen the photos showed pleasant reactions, saying, “It turns out that your ancestors may have never accepted a cat in your home.”

It may never be accepted for animals to steal our dining food, but sharing our leftovers with them is more gracious as always.

Watch the heart-warming miracle of life unfold when this dolphin gave...