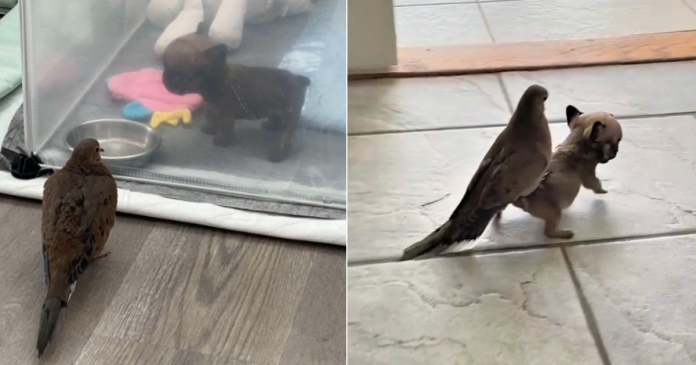 A special bond between two different species is not unlikely. Although it is rare, it is possible. The two different species have a way of communicating that most of the time, even humans cannot understand. However, this doesn’t stop us from putting a smile on our faces just because they enjoy their friendship.

The Mia Foundation-Love For Mia, a US non-profit animal organization, has been working to rescue a puppy born with a cleft lip and jaw, and founder Sue Rogers has taken in a young bird abandoned by its parents. The bird, who they called Lovey, was only intended to be under their care for a few weeks before it is released into the wild. When Lovey was finally released, after a few hours, she would fly back, which seems to have decided that this is her home.

One Autumn day, when the weather turned cold, the staff of the organization was concerned that baby Lovey may be outside on a tree feeling cold. They decided to let her fly free inside the house and mingle with the other animals inside. However, the others were more interested in playing on their own, so Lovey did the same. Until one fateful day, a tiny French Bulldog named Alfie arrived and everything changed for little Lovey.

Alfie was 2 months old when he arrived at the institution, but because of his cleft lip and suspected hydrocephalus, he was particularly weak and, compared to the chihuahua, who was only 2 weeks old, was smaller. Although Alfie’s condition had stabilized a lot under the agency’s careful care, he was still very fragile and unable to play with the other puppies, sometimes even when he was free to run around the house.

Nobody expected that Alfie would attract the attention of little Lovey. Alfie never played with the other dogs in the house, but when he runs around and does other activities, little Lovey would follow him wherever he goes. Alfie is very happy to have a “different” friend, and he also allows Lovey to ride on his back while he runs around the house. Eventually, both become close friends.

Observing the peculiar pair, Sue was both surprised and moved: “They are the smallest animals here, where they find each other and become each other’s best little companions.” Although Sue plans to wait until spring comes and the weather warms up to get Little Love back into the wild, while Lovey and Alfie still enjoy each other’s company, Sue tries to keep them together every minute and every second to spend the best time with each other.

Finally, let’s take a look at the following 2 videos of Little Love’s interaction with Alfie: