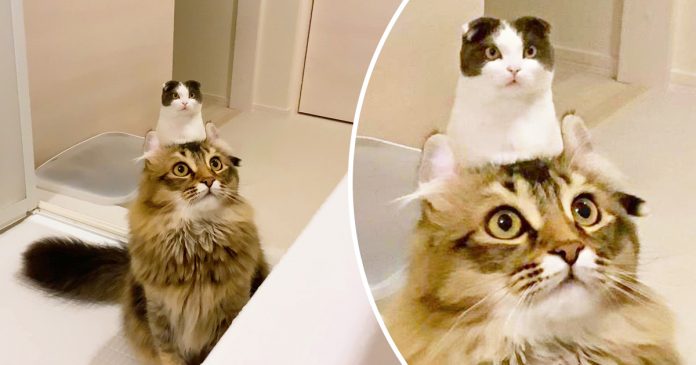 Animal lovers who have pets at home are getting to be very creative with their stories and photos and sharing them on social media sites. Nowadays, it is not surprising that animals have become popular due to the stories, photos, and videos shared by their owners. Their funny and inspiring posts on social media never fail to bring a smile to our faces, become inspired, and want to take a break from the real world and enjoy their stories.

Recently, a Twitter user from Japan shared a video of a funny situation involving both the cats he has at home.

According to the user, he took raised two cats – a Scottish Fold named Milk, and another an American Curl named Olive.

Olive is a year younger than her brother, Milk. When Olive was first brought home, she was just a kitten.

However, Olive grew bigger than Milk. Although, this did not affect their relationship. Both cats get along very well.

One day, their owners managed to record a hilarious video when both Milk and Olive were sitting quietly in the bathroom, waiting to be bathed.

The video shows Milk right behind Olive as if she were a mushroom growing on top of Olive’s head. Here is the video:

Milk was actually in a distance behind Olive for fear of bathing while Olive was quite excited to get into the bathtub. Coincidentally, their positions produced such a hilarious perspective.

It seems that many other users are also sharing their own funny incidents of their cats. Here are some responses to the user’s original post:

There are also those who edit photos and turn them into a cartoons.