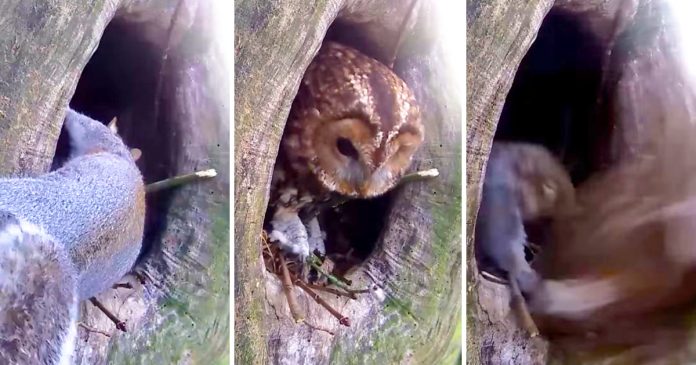 Some people are interested and enjoy wildlife, although they do not want to get involved in any physical activities like the other wildlife warriors engage themselves in. Others simply enjoy watching different species of animals in the wild and how they interact with one another.

To understand the ecology of wildlife, a British painter named Robert E. Fuller installed miniature cameras in several wild animal habitats, including squirrel nests. This allowed Robert to get a clear picture of wildlife interactions in addition to producing various ideas for his artwork inspired by wildlife.

However, there was a funny incident involving a squirrel and an owl that was successfully recorded through a camera installed by Robert in a hole on a tree.

According to Robert, he observed the situation on the hole for weeks and found a squirrel living in it, oblivious that it is being watched.

It’s like his lair. The squirrel would be out daily in search of food. During his absence, an owl is seen entering the hole.

This happens like clockwork for many days. The squirrel leaves to find food, and the owl enters the squirrel’s lair. Since both animals use the hole but not at the same time, the two never came across each other at the lair.

Until one day when the squirrel came back early, he found that there was an ‘intruder’ in his nest.

Just when the squirrel entered his lair, the face of the owl appeared outside the hole shortly afterward, and it seems like it had no intention of wanting to leave. Suddenly, the owl was knocked outside the nest. The squirrel is seen pushing the owl’s body away from its lair.

The incident was caught on video!

“I live here first so I should push you out!” On the other hand, the squirrel looked out after pushing the owl to make sure it did not come back. An unfortunate incident for the owl but netizens found it hilarious!

The courage of the squirrel is amazing considering that the owls are carnivores, only the squirrel was not attacked and eaten.

The moral lesson is, don’t be confident at getting into people’s homes, even if it is empty or abandoned.

You can watch the funny video below: