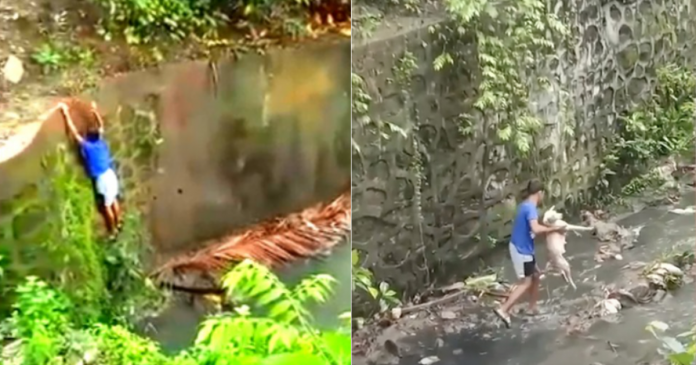 It is not easy to rescue an animal in danger. In most cases, some people with little experience or expertise who attempt to help a cat or a dog in danger are often not successful.

However, with sheer good luck for this helpless little dog, some unknown heroes are capable of facing life’s dangers without fear. Furthermore, anonymous heroes not only exist but as this story proves, there is a hero in all of us, only we don’t realize it.

One morning in August, as Nini Ragos made her way to the market to shop, she was horrified to see a bold little dog lying motionless in the middle of a creek. The dog was shivering from the cold water. Frightened and hungry, the dog’s facial expression denoted the time duration she had remained in such a pitiful situation.

With a little feeling of panic, Ragos pleaded to a male passer-by to help rescue the dog. Kuya, who Ragos called and responded without hesitation, quickly set out to rescue the animal and began to descend the creek wall with difficulty, but bent on getting to where the troubled pet was.

Finally, Kuya jumped into the creek, took the white fluffy immobile dog tightly between his arms, and with the help of a rope and a basket, Kuya and Nini, together with other passers-by, stopped to help and managed to climb her up and put her to safety. Fortunately, the brave animal recovered immediately.

The event occurred in the town of Amparo Subdivision, Caloocan, Manila, in the Philippines, and according to the young man who performed the feat of descending and rescuing the canine, revealed to Ragos that she had been down there for a long time.

Kuya asked for help from other passers-by when Ragos pleaded with him to help the poor dog but to no avail. Without any hesitation, he set out to act on his own accord. It was the best thing that happened that morning because if Ragos had not seen the poor dog, and for Kuya’s quick intervention, the end of this story would have been very different.

“I saw her there so helpless and that’s when I decided to go down with precaution and try to get into the creek. I managed to walk to where the little dog was and picked her up,” Kuya said.

Apparently, Ragos revealed that the dog is a mother of 6 puppies, all of who she still nurse feeds. She had a hip problem that caused an ailment in her hind legs. Hence, the poor mother-dog could not move them.

Also, she said that the owner was away for family reasons and the little mother-dog had been left with a neighbor, who neglected and lost her.

“What we want now is to help her because it looks like the little mom-dog was hit on the hip, she can’t walk. Thrown both legs back. She is injured, with many bruises and this could have originated from falling,” Ragos explained.

Although she is stable and still continues to recover, since being rescued, she refuses to eat but has the help of a group of professionals who will watch over her with strict observation and help her heal while waiting for her human to return. Let’s hope she and her puppies are better off home very soon.