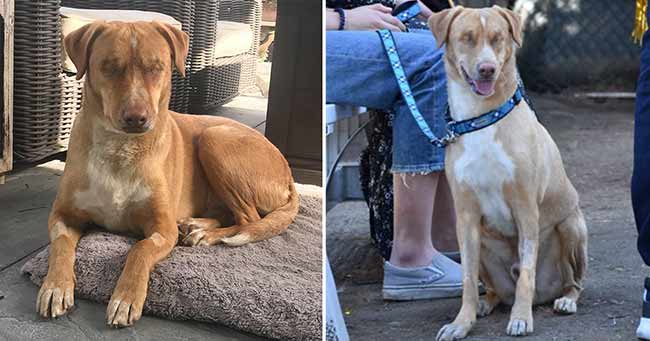 We should not take matters into our own hands, even if it involves our beloved pets. Just like us, they need medical attention, too. The experts know how to take good care of our fur babies.

This is a heartbreaking story of Louis, a 3-year-old caramel-colored puppy who has undergone the worst treatment from his former family.

Louis, a mixture of Labrador and German Shepherd was handed over to a dog kennel in Calexico, California, USA, after having his eyes removed by his owner due to an untreated eye infection.

He was rescued by the Helen Woodward Animal Center, who shared videos and photos of Louis on Facebook in a bid to find him the ‘perfect family.’

Louis’s heartbreaking story went viral around the world, and thousands of people were so touched by everything that he has undergone that they decided to do everything in their power to help him.

After a few moments, the photos went viral, shelters in California, USA, began receiving hundreds of emails and phone calls from good people who wanted to assist.

In just 24 hours, the center received nearly $12,000 (about $168 million) in cash, and more kept coming. Offers to adopt, to buy him food, to pay for his medical care, and more, kept coming in from all over the country.

An animal care institution, The Beloved Foundation, in Greenville, South Carolina, has offered to cover some of Louis’ expenses.

It is a happy ending! The perfect home has finally been found so Louis can leave all his past behind.

He was adopted by Steve and Kacey Walker, who planned to give him the best home, and he would be able to live with other rescue animals.

Louis has two brothers, a bulldog named Dragon and a rabbit named Honey.

Steve, Louis’ new father, knows firsthand what it’s like to live being blind. He was a Navy veteran who began to lose his sight gradually since he was 18, but he never lost his optimism and has become a Paralympic athlete.

Without a doubt, this is just the beginning of Louis’ new life. Countless good times await him and the unconditional love of a family that could see how special he is.