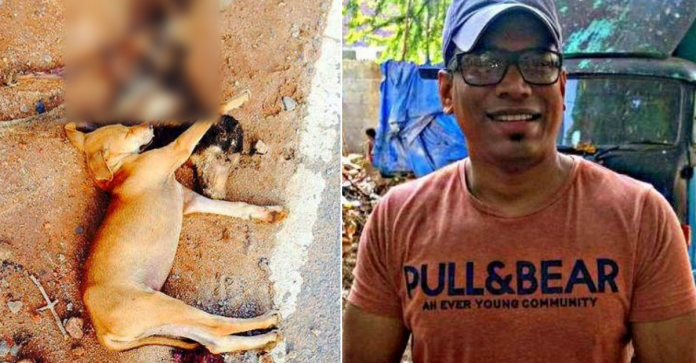 For more than one occasion, intense debates have arisen on the internet on whether animals are capable of having feelings. For animal lovers like us, we give them all our love. We know them well, so we have no doubts. They feel, they love, they get hungry, and when a loved one passes, they too feel devastated and suffer loss.

Just as a mother’s love is very strong for her children, so is the love of children towards their parents, and even animals feels this, too. A man from India discovered this incredible bond between a puppy and his mother when he refused to walk away from his deceased mom’s body.

Unfortunately, his mother was already dead and already in decay for several days. So sad!

Somi Gopalan had seen the image of the very same dog on Facebook a few days ago, it was a puppy lying on her dead mother’s body, but Somi didn’t know where he was.

VoSD (The Voice of Stray Dogs) found that the dog and his mother had been there for a week. It took Somi some time to find out where the puppy was, and during that time, VoSD was unable to locate the dogs, too…

When the dogs were finally found, many people didn’t do anything because they didn’t know how the dog was going to react (they were afraid to get close). In the meantime, they were all debating on how to handle the situation. When Somi arrived at the location, he acted on the initiative and carefully helped the dog.

Somi gave the puppy’s mom a proper burial. He convinced the puppy several times to come with him, which was quite difficult because the puppy did not want to leave his mother.

After quite some convincing he was able to get the puppy and bring it to safety. The puppy was named Somi, just like his rescuer, and will be adopted by the founder of VoSD. The puppy has finally been given a forever home.

The saddest thing about this is that the photograph of the puppy embracing his mother’s body is still circulating on social media. Even more, people have been spreading the photo for their personal interests, asking for money donations. It is very enraging to know that this is still happening.

Watch out for people trying to take advantage of using images like these. Fortunately, this puppy has already been rescued and his mother buried. He will recover soon and have all the love he needs forever.

We admire the work of Somi and VoSD for rescuing the puppy and providing a proper burial for his mother.