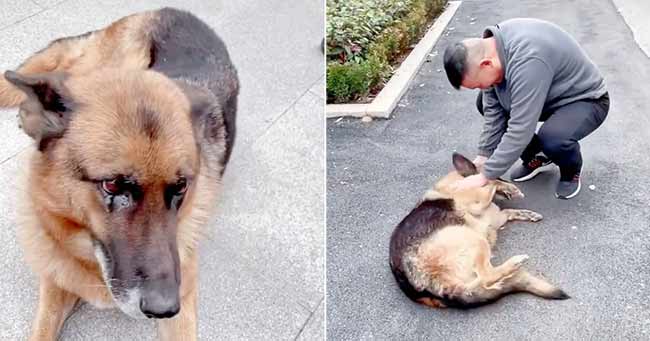 Prepare some tissues for those who have a soft heart, for this touching story will surely melt your hearts. This is a heart-warming moment a retired police dog literally cried when he reunited with his former handler.

WangWang, an eight-year-old German Shepherd, worked as a sniffer dog at a security checkpoint in the Xichuan area of central China’s Henan Province.

He retired in June 2019, and he has found a forever home to live in for the rest of his life, which means that he will be parting ways with his handler.

Last month, a police officer, Matan Wangwang’s former handler, decided to surprise him by visiting the furry friend while on patrol in the neighborhood near Wangwang’s house.

A recent clip shared on the Xichuan Police Douyin account – the Chinese version of TikTok – shows police officers calling WangWang outside his home.

WangWang licked his legs and cried tears of joy as he stayed by his former handler’s side.

When it was finally time to go, and the patrol unit went back to their vehicle, WangWang refused to let them go and stayed next to his handler.

The post read: “Wangwang’s hair is whitened, but he’s well-fed, he’s getting fat. It’s always hard to say goodbye to your friends.”

The netizens’ hearts melted during the loyal dog’s emotional reunion with his handler.

One wrote: “Dog is a loyal friend, please treat him well!”

“You can tell how much Wangwang misses his handler,” a second commented.

Some people who have seen the emotional reunion were wondering why WangWang was not allowed to stay with his handler.

Xichuan Police responded in comments: “Police dogs are generally well-fed at training centers but our officers cannot dedicate their time to playing or exercising with retired dogs.”

“They will be better cared for in a suitable family than staying in a training center.”

It is undeniable that dogs are loyal companions, and they love us unconditionally.