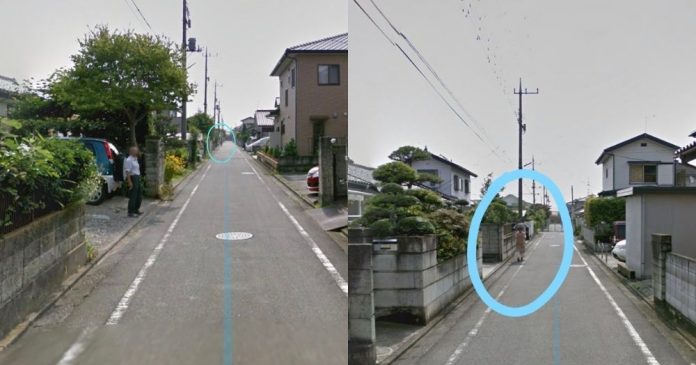 During this COVID-19 Pandemic and lockdown, most of our jobs get diverted to online working. More often than not, we browse other things online while we take a break from our jobs. An unusual incident has happened to a Japanese man who was bored at home due to the pandemic lockdown and finds something on Google Earth while browsing. He finds his mother and late father on Google Earth while he was browsing the street view of his parents’ home. Very touching!

Twitter user @TeacherUfo posted on Jan. 4, 2021, that he found his mother and late father while idly scrolling through Google Earth one night.

He was on Google Earth street view when he was looking up his parents’ home when he spotted a familiar figure standing in front of the house.

He immediately recognized his father, who passed 7 years ago, standing in front of their home, waiting for his wife to arrive.

Scrolling further, he recognized his mother walking home not too far away.

“It seemed like he was waiting for his wife to return home while taking a break,” the Twitter user wrote.

The man added that his father is a quiet, kind, and gentle man who intently looked after his wife.

“I hope that they’ll just keep the image of this place as it is,” he said.

After the photos were shared on Twitter, other users shared their Google Earth encounters, too.

Several Twitter users responded to @TeacherUfo’s tweet and shared their own encounters on Google Earth, as well. They were all heart-warming photos, too.

Twitter user @shiumeko shared that they saw an image of their dog who died two years ago when they looked up their home on Google Earth and hoped that the image won’t be changed.

Another user, @yosio61, found an image of their grandmother, who passed away nine years ago.

“My mother cried after I showed this to her,” the user wrote. “Grandpa died 14 years ago, and Grandma lived by herself after he passed away. When I saw her walking down the road looking so lonely, I couldn’t help but cry.”

@TeacherUfo tweeted, thanking everyone who shared their heart-warming experiences on Google Earth with positive and emotional replies and photos. Indeed, memories they have discovered online has brought back all the emotions during this season of the pandemic.

Wife humiliated and denied water by ‘upper-caste’ villagers—then husband does the...