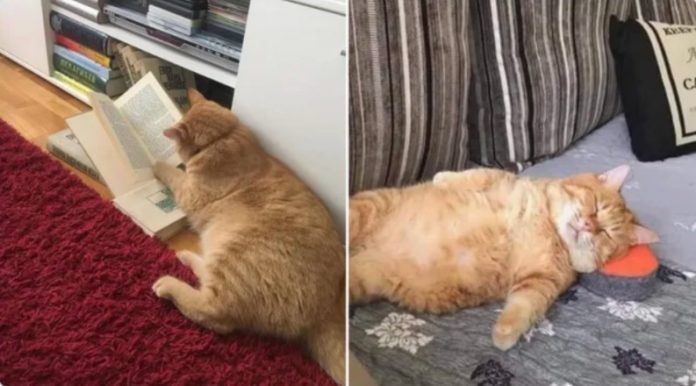 Cat-owners who have owned an orange-colored cat know that these breeds have special talents – they can eat a lot and sleep much of the hours in a day. A certain orange cat and its brother, both named “Fat” and “Handsome” can sleep literally anywhere around their owner’s house. Fat can sleep ten hours a day, fans have started calling him “A sleeping god,” and has a fat belly that fans want to pinch and hug him.

Jessie adopted an orange-colored stray cat in 2016. Upon learning that it was injured, he immediately sent the cat to the vet. He learned that the stray cat was infected with the cat immunodeficiency virus (FIV) and had cat AIDS. This did not stop Jessie but instead promised to adopt and take care of it from then on.

Since Feixiang, the orange-colored cat once wandered the streets, it’s normal reaction was being very defensive, but once it got used to its owner, it gradually relaxed. Feixiang’s favorite hobby is to sleep, up to 20 hours a day! This worried Jessie for it can be some physical problems that have been over-looked, but all tests have come out normal, and the vet said that it just likes to sleep most of the hours of the day.

Feixiang can literally sleep anywhere inside the house. Although its sleeping position varies, it can be strange and creative at times. The owner sometimes takes photographs and videos of it sleeping and even cut its nail while it was asleep and Feixiang did not wake up! This funny gesture attracted a lot of netizens on social media.

The two cats, Fat and Handsome, get along just fine. Handsome’s owner has passed away, and he did not get along well with the other cats in foster care, he was always getting into fights. Jessie thought that it looked similar to Fat (Feixiang), so he decided to bring him home with him. Sure enough, Fat and Handsome got along very well.

Fat loved to sleep, Handsome loves food. These two orange-colored cats have not failed to live up to their “breed reputation.” These types of cats are the typical fat and beautiful colored kinds that attract the attention of many social media users.

For more interesting photos of Feixiang, go to Run It Fat.

These adorable monkeys are being extra cheeky and playful—But not in...