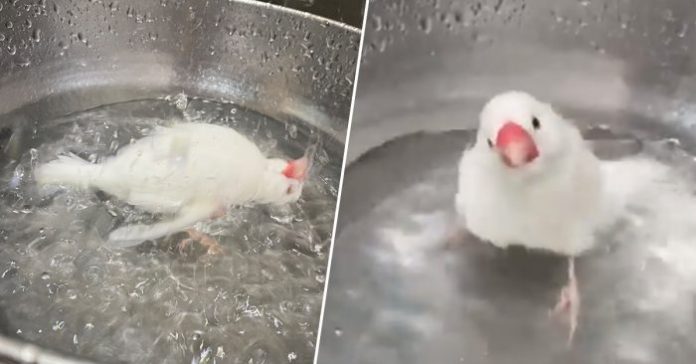 There are numerous cases of animal abuse around the globe, and wildlife warriors are taking action in exposing these abuses among different social media communities to enable reports and assistance to be given in real-time.

However, photographs of animals being persecuted and being exposed on the internet without true confirmation on who the culprits are can indeed raise many suspicions.

Maru, a white bird, was once a hot topic in mid-2020 when a photo of him ‘lying’ in what is said to be “boiling” water placed on a pan raised suspicions. With the water blaring and the bird lying on it with eyes closed, Twitter users who have seen the photo could not resist thinking that the bird was being “boiled alive” in bubbling hot water!

“No, the expression on his face is a bit strange. He was lying down. What’s going on?” wrote the owner of Maru on his Twitter page when he posted this controversial image of the bird.

However, after garnering plenty of comments from netizens who felt surprised and really thought Maru was being boiled alive, the owner of the bird immediately issued a statement of what was really going on.

“Everyone was talking about fried chicken or boiled birds, but actually it is a happy bird after a bath. Happy little bird,” he wrote responding to all allegations.

The photo was really funny for most netizens. Just seeing Maru’s facial expression and the state of the water in the photo looked like it was boiling. Maru looked like he was really being boiled alive!

Not contented with only the statement, Maru’s owner posted a 26-second video showing how excited and happy Maru was while bathing in the pan. More importantly, he was bathing in cool water!

So, nobody has to worry. No animals were injured in the production of these photos and videos.