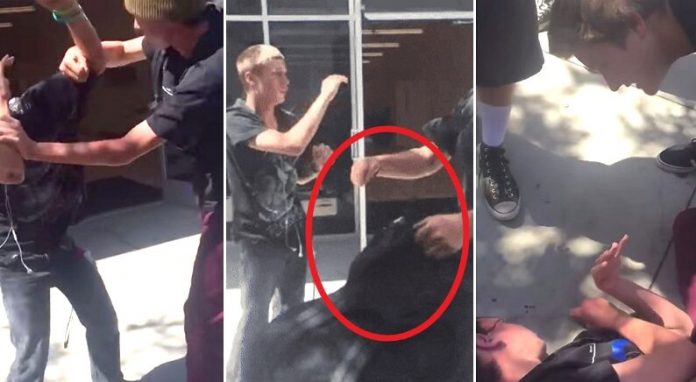 Bullying is never tolerated in school. Some lucky students have defenders when they come across a bully, and the others just keep to themselves and never talk about the incidents. A high school student defended a fellow student who was blind and became the talk of the campus. Students were amazed by him and said, “It’s like “Captain America” in high school!”

Recently, a high school in California, USA, had a bullying incident that led to a school fight. Austin Higley, 16, a student at that school, is blind.

It was lunchtime when a classmate harassed Austin. A bully who slapped and punched Austin like a sandbag just for the fun of it.

Austin was hit on the head several times, and was screaming for the bully to stop. Since the other students were rather scared of the bully, too, were of no help. They just stood around the two boys, watching while the bully punched Austin.

Suddenly, someone stepped in and punched the bully to help Austin.

The person who harassed Austin with forceful punches, fell to the floor but could not stand up immediately.

Friends of the bully winced and withdrew from the crowd.

Cody Pines, 17, a school football player stood from his seat and did not hesitate to fight for Austin.

The incident was captured on video by another student who shared it online, and the video immediately went viral.

When the police arrived at the school, they were able to interview a group of students who have seen the incident. Austin’s attacker has since been charged with misdemeanor battery.

Cody, on the other hand, did not get any charges. His school did not issue any disciplinary actions, saying Cody’s actions were merely defense.

In an interview with the media, Cody explained his side of the story. “I didn’t want to use force, but I only hit the offender once, and I just tried to get him off Austin.”

He then revealed, “I regret that I was caught, but if I hadn’t done that, Austin would have continued to be harassed.”

Cody also said, “Austin is a great friend, and I want everyone to get along with Austin.”

“Honestly, I feel like Cody saved my life,” Austin said in an interview in Dr. Phil Shaw’s talk show.