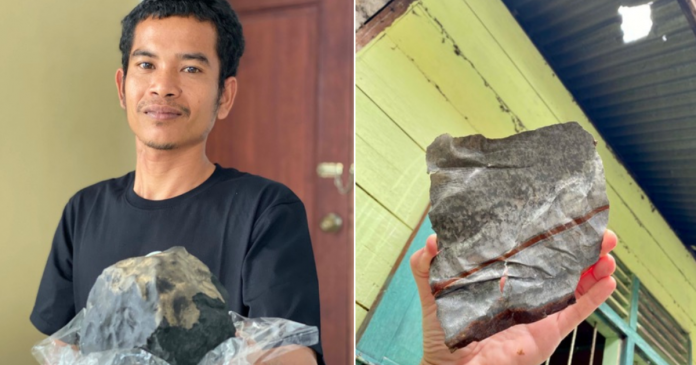 Meet 33-year-old Josua Hutagalung, a humble carpenter from Indonesia who recently encountered a peculiar event in his home that made him an instant millionaire.

Josua made headlines when a meteorite fell at his home in August, reported Tribun Medan.

It was a sunny Saturday in August when Jusua, from Kolang in North Sumatra, was busy working on building coffins outside his home when he heard a thunderclap followed by a loud bang on the roof.

He immediately ran towards where what seemed to be a large rock that landed 15cms. deep into the ground but made a large hole on his roof.

Though the bizarre large rock was still warm, Josua said it was partially broken when he managed to dig it out from the soil.

“The moment I picked it up, the rock was still warm then I took it inside the house.” Josua said in an interview with Kompas.

He had no doubts that the peculiar rock that fell from the sky was a meteorite because he believes that nobody would throw a 2.2kg rock on his house on purpose.

After posting his bizarre incident on social media, the news immediately went viral.

“From my posting on Facebook, I received responses from hundreds of netizens, and the post was shared hundreds of times. As a matter of fact, there have been many local and international reporters who have come here to cover the incident,” he added.

According to his interview with Kompas, the rock was not from this world and that a magnet could stick on it.

Here is a video:

Josua was paid GBP1.7 million, or RM7.6 million, for the space meteorite by an English collector from America. According to Josua, that amount was equivalent to 30-years’ worth of his salary.

Jared Collins, a space rock expert based in Bali, recalls being sent out to inspect and authenticate the item.

“My phone lit up with crazy offers for me to jump on a plane and buy the meteorite.” He told Tribun Manado.

He then shipped the meteorite to the original buyer in the United States. The rock is now stored in liquid nitrogen at the Centre for Meteorite Studies at Arizona State University.

According to the experts working at the university, the space rock has been identified as CM1/2 carbonaceous Chondrite, an extremely rare meteorite variety that scientists believe contains unique amino acids and other primordial elements.

Josua now plans to retire since he has enough money for his daily needs.

According to Tribun Manado, Josua plans to build a small church for his community using some of the money.

Aside from the church he plans to build, the father of three sons concluded, “I’ve always wanted a daughter, and I hope this is a sign that I will be lucky enough to have one.”

Elderly man who doted on his children was abandoned after being...