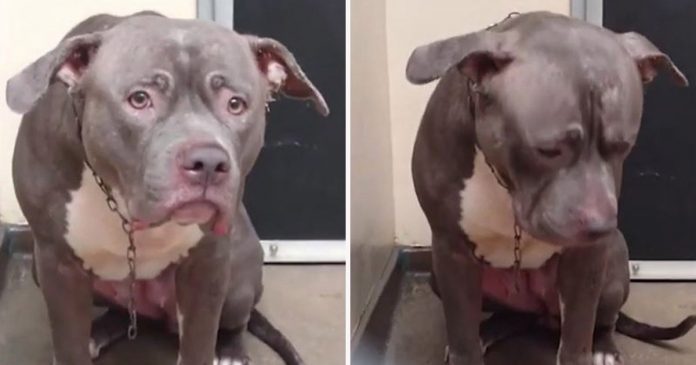 From abandoned dog to homecoming queen! The dog’s sad expression was very evident. She cried when she realized that her owners were never coming back for her, and it broke so many hearts of people around the world. Luck has been very kind to this poor Pitbull dog that she found a new home with new loving owners. To some people, they are more than just pets, they are part of the family, and the dogs feel that, too.

A four-year-old pitbull is shown crying in a video captured by Lolys Menchaka, an activist who collaborates at California’s Inland Valley Humane Society Foundation, wherein it was a very emotional moment for the dog when she realized that she has been abandoned in a shelter and her owners were never coming back. She seemed to understand that the shelter was like a cage for abandoned dogs.

Their emotional reactions manifest and reflect on how dogs are affected once they leave them on the street or deliver them to a shelter.

Menchaka points out, with great sadness, that this is not an exceptional case:

“Electra represents the face of sadness and reality in the shelters.”

Although it is unclear whether Electra was abandoned in the street or delivered directly to the shelter, members of IVHSF help these abandoned animals through their depression and maintain good health.

“Sometimes I’d like to understand the owners who deliver their animals and I don’t like to judge them, but when you see the dogs come to the front desk, I can’t understand why it is so easy for them to just abandon these poor animals.”

Electra had the support of Tiffany Fan, a member and founder of JL Resue, and found a temporary home when Adriane Silvano stepped in. Fan points out how dangerous depression can be when dogs are abandoned:

“I was so sad! I really think sometimes they realize they’ve been abandoned, and they just give up.”

However, Electra’s sweetness was heart-warming to those who gave her a temporary home, and they decided to adopt her permanently and make their house her ultimate home.

Tiffany has been updated on the adoption and points out that Electra is a very sociable dog and that she gets along wonderfully with dogs, children, and all family members; and has left behind the feelings of depression and abandonment and since allowed himself to show his loving personality.

“He became a completely different dog. He was happy, he was on the couch, he wanted to snuggle up.”

Electra’s photos in her new home show that she is truly happy and that she is getting all the love she needs thanks to the help she received from JL Rescue. The foundation takes in many dogs that continue to search for a new home. Visit its website, and maybe you or one of your friends may want to adopt one of these furry cuties and give them a new loving home.

Share Electra’s moving story to help raise awareness of the depression animals suffer when they are abandoned.

A Dog Blinded by His Former Owner Due to Eye Infection...