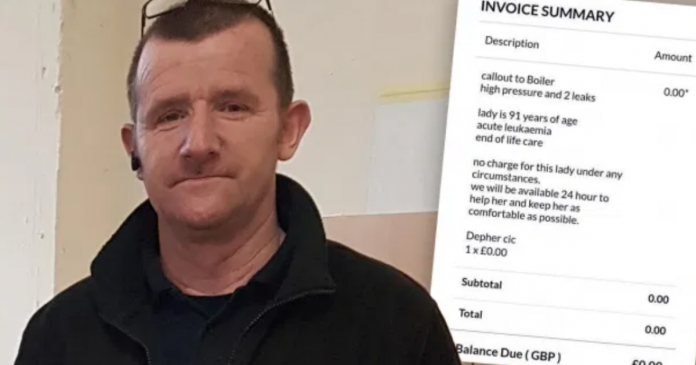 It doesn’t take much to be kind. Something as routine as smiling at a stranger can change their mood and make their entire day better.

It took one elderly man to be mistreated by an engineer for James Anderson to close down his private business and start focusing on his non-profit company Depher, which provides free or low cost plumbing services for those in need.

Recently, his selfless deeds has come to light when he had serviced the home of a 91-year old woman. He was about the charge her when he found out that she had acute leukemia. Still, James sent out a bill to her which later reached to masses online.

It astounded the elderly woman, and the entire Internet that the bill was summed to a total of $0. That’s right, he didn’t charge her at all!

‘No charge for this lady under any circumstances. We will be available 24 hours to help her and keep her as comfortable as possible,’ the father of five shared with Metro.

It turns out that this isn’t the first the man has practiced his kindness. James has been actively involved in crowdfunding and donations raised to help alleviate the unfortunate plights of people in Lancashire.

When Newsner asked James about peoples’ reaction to his actions leading to a £8,000 ($9,940) debt, he answered, “A lot of people close to me ask: why are you getting yourself in to debt? Why are you doing this? To me, debt is debt… I would rather owe some money to somebody and another person be alive and happy and safe.”

He expressed that it wasn’t totally unexpected that his deed would blow up all over online and that he’s being hailed as a hero. To him, it’s more of a moral principle he withholds strongly.

“It’s an ethos that’s in my heart and it will always stay there,” he said.

James is looking forward to expand his charities across the country. He’s been in discussion with engineers countrywide and is receiving promising outcomes. As soon as the funding comes in, he can began the works to realize his dream.

He has a strong sentiment associated with his work. He exclaimed that “(he) don’t want any person who is elderly and disabled in this country, in this day and age, to die or suffer because of a cold home or a lack of funding to repair the boiler.”

His ultimate goal is to bring the number down to zero. We wish him luck and hope he continues to inspire with his generosity.

Truck Diver from Hanoi Heroically Catches a Toddler Falling Off a...