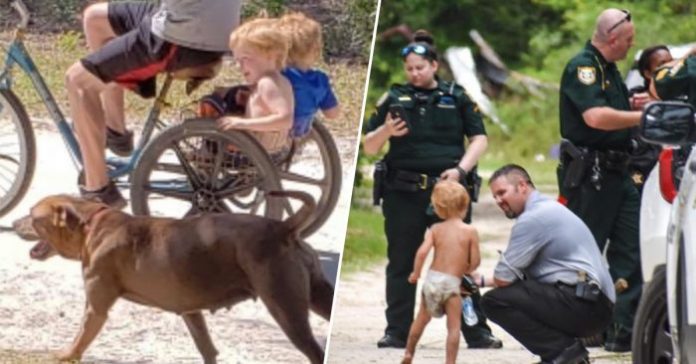 The loyalty and courage of a dog never fails to touch our hearts. When a 3 year-old autistic boy suddenly went missing on one Wednesday morning, the parent from Florida was so worried but miracle happened at last with the help from their dogs.

Marshal, a three-year-old boy, lives in Ponce De Leon, Florida. He has ASD, or Autism Spectrum Disorder and he can’t speak yet.

One day, Marshal suddenly disappeared, and he was only wearing a diaper before he went missing.

Marshal’s parents became anxious and started to panic, therefore, they called the nearby police station and asked for help to find their missing son.

Marshal’s parents noticed that their two dogs, Nala and Buckwheat, were also missing.

A police officer from Walton County Sheriff’s Office, with the help of relatives, friends, and neighbors, cooperated to search for Marshal around the forest-surrounded Ponce De Leon area.

The goal for the search period after Marshal went missing was set. If the little boy was not found after that certain point in time, chances may be catastrophic.

And because of Marshal’s autistic condition, the situation makes everyone feel more worried.

The two dogs are like bodyguards to Marshal, they always protected their little master.

A little boy wearing only a disposable nappy accompanied by two dogs came out safely from the woods. There was dirt on their bodies but otherwise were fine.

Marshal’s parents were very grateful to see their son return to the safe and was well-guarded by the best furry protectors named Nala and Buckwheat.

Marshal’s mother said that he may have gotten out of the house by himself then headed to the woods when the two dogs have chased after him and protected him all the way.

When Marshal was found, no trace of panic was seen on him, and he was excited that everyone came. He thought that they were there to play with him.

Everyone was relieved when Marshal returned safely.

His family is very lucky to have two dogs so protective and loyal, and ready to look after little Marshal. Nala and Buckwheat always ensure their little master is safe.