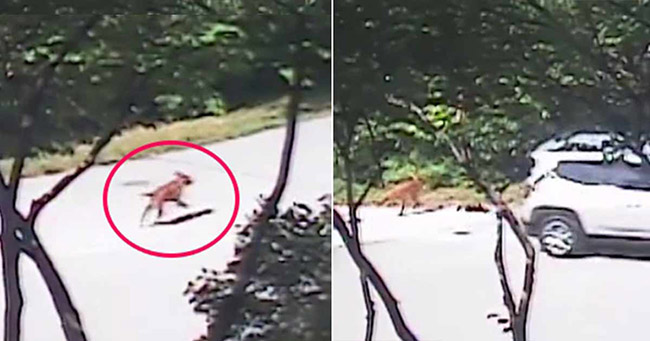 They are Man’s Best Friend. Love Them, Don’t Abandon Them. Owning a pet has huge responsibilities, similar to a couple who decides to bring a baby into this world. However, when the day comes that you no longer want your pet, it is still not your decision to just get rid of them.

Although they know it is cruel, some people just abandon their pets when they have no more need for them. They do not have the slightest hint on how heart-breaking that is to the loyal pet.

Glenn and Beverly Blake, a retired couple from Springfield, Missouri, USA, couldn’t believe what they saw recorded in their surveillance cameras outside their property, and they immediately contacted the police.

They saw how a woman driving a white SUV park her car on an isolated road before she got the dog out of the car and abandoning her in the middle of the quiet road, uncaring of what will happen to it.

The couple posted a video on social media asking for help from the community to identify the animal’s owner.

Initially, the dog thought that she was going to have some fun with her hooman mother when she rode the car. However, she did not imagine that she would be abandoned that same day.

In the video, you will see how the woman stopped at an abandoned road, where people rarely pass. The woman probably did not want anyone to witness what she did to the poor dog.

You could see that the dog was happily wagging its tail, thinking it was another day to walk in the park with her momma. The dog thought that she was going to have a drink of water or play with a toy while she walked around.

The dog was oblivious to what her hooman mother was intending. The woman, however, hurriedly entered the SUV and drove off.

The dog was walking around, smelling the grass, then suddenly realized that she was left behind.

The cruel woman begins to leave in a hurry, and her dog just realized she was left behind, then ran frantically after the fast vehicle.

Luckily, the police were able to rescue the dog and immediately taken to a rescue organization in Springfield called Rescue One.

They discovered that her name was Honey and that the owner was a 26-year-old woman named Ashley Nicole Devine.

Honey was immediately treated in the rescue center for she suffered from dehydration and burned paws from running on the hot pavement. They assumed that she ran quite a distance to catch up with her hooman, considering the state she was in when she was brought in.

In Rescue One, they changed her name to Hope. The sweet girl was placed into a loving foster home. She is doing well and loves playing with her fur siblings.

Meanwhile, the shelter has been overwhelmed with multiple adoption requests. They are carefully analyzing each other to make sure nothing like this doesn’t happen to Hope again, and may she find a decent family to bring her home soon.

Update: The former owner, Ashley Nicole Devine, has been arrested and charged with animal neglect crimes because in Missouri, it is illegal to leave a pet.