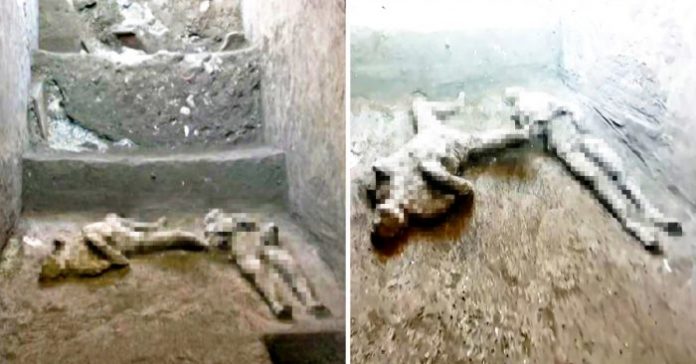 Pompeii is finally being unearthed. Nearly 2,000 years ago, Mt. Vesuvius volcano erupted and destroyed the ancient Roman city of Pompeii, leaving everything in ruins. Recently, Archaeologists have been working on an excavation site to rebuild Pompeii and reportedly found two bodies of victims from the eruption.

According to Wikipedia, Pompeii was an ancient city located in what is now the comune of Pompei near Naples in the Campania region of Italy. Pompeii, along with Herculaneum and many villas in the surrounding area (e.g. at Boscoreale, Stabiae), was buried under 4 to 6 m (13 to 20 ft) of volcanic ash and pumice in the eruption of Mount Vesuvius in AD 79.

“The two bodies found, believed to be remains of a 30 to 40-year-old high ranking man, and an enslaved person whose age is between 18 to 23, were perhaps seeking refuge when they were swept away by the prognostic current,” Pompeii Archaeological Park Chief Director Massimo Osanna said.

Studies show that the body of the wealthy man was still intact and assumed that he was a high-ranking individual due to the fur robes found around his neck.

The other body found was believed to be a servant who did labor work throughout his life due to the shattered spine that was still connected to the corpse.

Pompeii was ruined by the volcanic eruption of Mount Vesuvius in 79 A.D., and this disaster destroyed the ancient Roman city, which killed around 16,000 people. It was assumed that the eruption occurred around noon.

“This was a death by thermal shock, as shown by their grasped feet and hands,” Osanna told reporters.

The discovery was made on November 21 as excavation work was ongoing on a large villa on the outskirts of an ancient city located close to Naples. Osanna described the discovery as “a great and remarkable testimony” of the day Mt. Vesuvius left Pompeii in ruins.

The excavation work is still on progress, but the site is closed to the public due to the COVID-19 Pandemic.