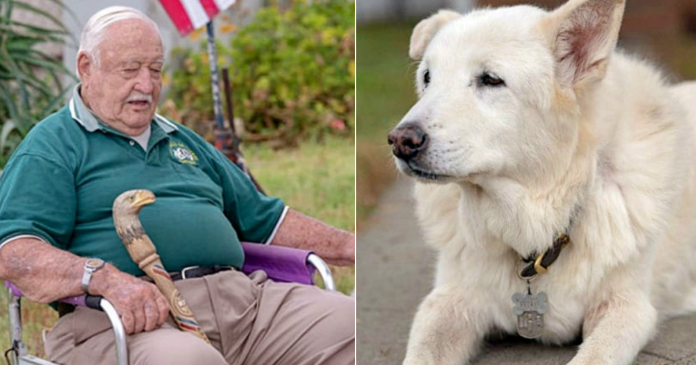 Sam, a 13- year-old German shepherd led a lonely life at the shelter home ever since he was abandoned by his owner. He was often overlooked by the staff as he was old and regarded as a senior dog at the shelter which was a hive of activity with noisy puppies and kittens.

He was seen as a misfit and would sit all day long in his kennel, watching people, both young and old, leave with puppies and kittens. Nobody seemed to be interested in Sam whose owner in Arizona had surrendered his pet dog to a shelter after he was deployed to the Navy.

With each passing day, the German Shepherd Rescue of Orange County in California had come up with a difficult decision to euthanize Sam since it didn’t seem like anyone was going to adopt him and also the shelter needed to clear space for new dogs.

It was at this point, a 93-year-old Navy veteran George Johnson was searching for an old white German Shepherd to fill in the void in his life after the death of his own dog, a white German shepherd.

He called up the shelter home to inquire if they had one but they responded that they didn’t have a white one at the moment.

Few days later, George got a call from the shelter saying another shelter home in Arizona had an old white German shepherd.

Without hesitation George said he wanted to meet the dog right away. A volunteer from the rescue drove all the way from California to Arizona to fetch Sam and introduce him to George.

George was anxiously waiting at the shelter home, when the volunteer returned with the dog.
It was love at first sight. The two were meant to be.

George said he had always been fond of white German Shepherds and at the twilight of his life, he wanted an old canine buddy!

George, the naval veteran, became a hero again when he signed the adoption papers and took his new buddy, Sam, home.

“He’s an old gentleman, so I say this, two old dogs together, old sea dog and an old German Shepherd and we’re gonna hang in there as long as we can,” said George.

Petco Foundation, which heard of George’s adoption story awarded the rescue group in Orange County with $25,000 and even gave Sam a holiday shopping spree so he could go to his new forever home chock-full of goodies!

“Sam has made a tremendous impact on my life. I have someone to love, someone to talk to, and someone to look after,” George said. “I’ve received a few medals, ribbons and commendations during my Naval career, but this dog fills my heart more than all of them put together.”

George may have saved Sam’s life but the navy veteran says: “ Sam’s little life matters just as much as mine.”

George’s adoption story has touched the hearts of more than 300,000 online users with comments praising him.

“Thank you for adopting this precious older dog and give him a chance to a good life… he’s beautiful and looks so comfortable and relaxed. God bless you both,” commented one reader.

“I think older people need to be paired with elderly dogs,” commented another.

As for George, they have become inseparable, working together in the yard and going on rides together.

Most senior dogs do not require the kind of care Sam has. The majority just need a good home and many of these senior dogs regain their vitality and reward their adopted families with years of unconditional love and devotion.