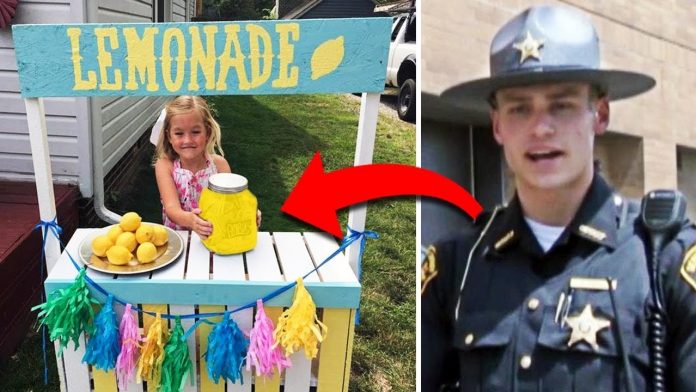 A police officer in Ohio stopped at a little girl’s lemonade stand while he was out on patrol. After buying a glass of lemonade, he talked to her for a moment and gave her a little lecture. He came back the next day, but not to buy a glass of lemonade.

Lake County Sheriff’s Deputy Zach Ropos was out on patrol in Painesville on a Monday when he spotted a little girl selling lemonade. The police officer bought a glass of lemonade from Gabrielle and started a small conversation about her lemonade stand and why she wanted to raise money.

“I talked to the little girl, gave her a speech about how courageous and admirable I think her efforts were to save up her money,” Ropos said. “I asked her how much she saved up, and she said she only had a few dollars.”

Gabrielle said she had more money saved, but her mom’s car ran out of gas, so she gave some of her savings so her mom could fill up her car’s tank. Apparently, this story touched the officer’s heart.

“She said that she gave some of her savings to her mom. That’s when I was moved to tears because of how great and thoughtful this kid was,“ Ropos said.

Ropos then asked Gabrielle what she intended to do with the money she has saved, and she said that she wanted to buy an iPad. 22-year-old Ropos suddenly remembered that he had an old one at home, but when he got home and tried to turn it on, it was no longer working.

“I went home that night, fired up the iPad, but it just wasn’t updated anymore … nothing really worked on it,” Ropos said.

The next day, he scouted for a gadget store that would split the cost of a new tablet for the little girl. That afternoon, he went back to the lemonade stand and presented Gabrielle with the gift.

“She just kept hugging me,” Ropos said, “Seeing her happy face is how I remember Christmas when I was still 5 years old. She just kept smiling. Her smile is worth a million dollars.”

Ropos has worked at the sheriff’s office for only eight months, but his boss has had a good impression of him.

Sheriff Dunlap said he’s never spoken to both Gabrielle and her mother, but from what Ropos has said to him, he understood, “both the mom and girl were in tears. Tears of appreciation and joy. From what the deputy said, they were surprised and extremely grateful.”

Great job, Deputy Ropos, for leaving a lasting impression on this little girl and giving her something she will cherish for a long time!

Here is the video: