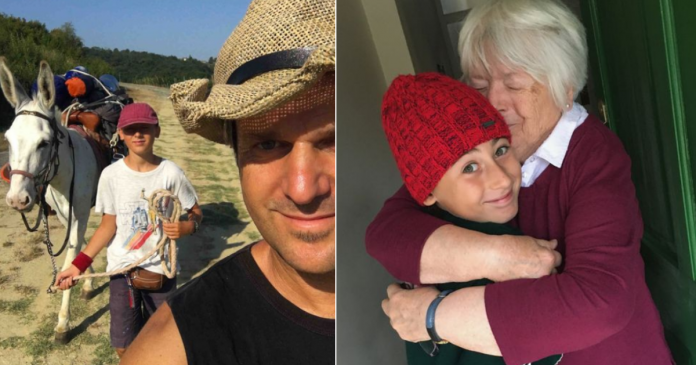 All Flights are canceled due to the pandemic!

11-year-old Romeo Cox wanted so much to be with his grandmother, Rosemary, 77, that he decided to walk from Italy to Britain via Switzerland and France. About a year ago, Romeo moved to Italy with his parents, and since then was not able to visit his grandma who remains in Britain. He planned to visit her in late Spring but did not expect all flights to be canceled due to the COVID-19 pandemic. The situation did not stop Romeo from deciding to go to his grandma… by traveling on foot!

Romeo looked forward to being able to hug his grandma again when they arrive in Britain. He was devastated upon learning that all flights from Italy to Britain have been canceled due to the pandemic. He and his grandma were close, so this did not stop him from being able to come to her. He couldn’t stop worrying since his grandma lived by herself, so he had the idea of walking back to England.

Romeo’s parents disapproved of his idea, but he begged, and seeing real concern for his grandma, they reluctantly nodded in agreement. On June 20, Romeo and his father traveled on foot from Italy to Britain via Switzerland and France, walking 2,735 kilometers and spending 93 days before finally arriving in the UK.

Romeo and his father had so many adventures along the way, went camping and slept under the night sky, being chased by wild dogs, and tamed a wild donkey. Romeo’s feet started having blisters, but that didn’t stop him from pursuing his adventure. When they arrived in France, they worked as volunteers in refugee areas and raised more than £13,600 (about $17,443.15 US Dollars) for the charity. They arrived in the UK on September 21.

When Romeo and his Dad arrived in Britain, they were first quarantined for 14 days before they were allowed to reunite with grandma Rosemary. Romeo could not help but run into her arms when he saw his grandma and the joy on his face could no longer be hidden. Grandma Rosemary missed Romeo so much that she hurriedly came out of her home and welcomed him with open arms. The heart-warming scene has touched so many people’s hearts.

Hiking is fun and adventurous, but it’s easier planned than done. Romeo insists on hiking for more than 3 months just to get back to the UK to meet his beloved grandmother since he has sincerely set his heart into getting back to her.

Romeo said to Triangle News, “We had the best hug ever. I’ve really missed her.” In return, Rosemary replied: “Seeing Romeo set his journey just to be with me feels so special. Children can inspire us.”

Romeo’s fundraising for the Refugee Education Across Conflicts Trust was inspired by his father’s pal Randolph, who migrated to Italy from Ghana.