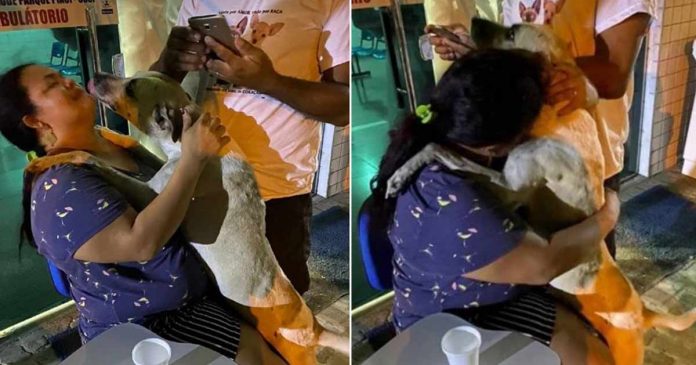 Experts claim that dogs do not like to be hugged because the gesture immobilizes them, causing high levels of stress and anxiety.

But what if the dog leaps into your arms, hugs and starts licking all over your face? What is the doggie trying to express?

More so if the dog is a stray and out of nowhere it jumps into your arms as if to comfort you from some distress, pain and grief?

This is exactly what happened to a woman who was crying uncontrollably on the sidewalk in front of the hospital where her mother had died of Covid 19 a day after admission.

Distraught that she could not be by her mother’s side on her deathbed, Jaqueline Masceno, living in Brazil, went weak on her knees and burst into tears after doctors conveyed her the sad news.

“I was on the floor and the doctors and my husband were trying to calm me down, “she said, adding it was at this juncture a dog came out of nowhere and jumped into her arms.

Taken aback, Jaqueline was told that it was a stray dog which had made the hospital’s sidewalk as its home.

“It jumped in a way I’ve never seen because even my dogs don’t do it the way this stray did,” said Jaqueline, who felt convinced that through the dog’s comforting caresses and licking, she was able to feel the spiritual presence of her mother.

Now, a new study finds that dogs not only feel distress when they see humans sad but will also try to do something to help.

As Jaqueline left the hospital, the dog walked away quietly. But before the grief-stricken woman left, she gave her phone number to the hospital staff, telling them to call her if they saw the dog again.

On the day she was at the church holding mass in honour of her late mother, she received the call from the hospital.
Jaqueline rushed to the hospital and there was the dog which had given her the strength, at a critical moment, to face life after the death of her mother.

She took the dog home and since then the lives of these two beings have completely changed. The dog, which she named Gabriel has a home, and for Jaqueline it was a constant reminder that her mother’s spirit was always with her!

Surprises in life come in many different ways and give a reason to move on!