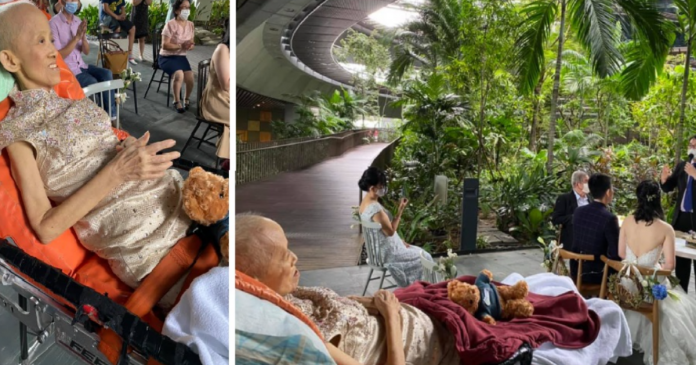 While dying with dignity still remains a priority for most people in the world, some patients near the end of their lives, may have unconventional wishes such as seeing their furry friend one last time, seeing their children graduate, drinking their favourite beer or even wanting to meet their sworn enemy to ask for forgiveness.

In it just unfortunate that we live in a society that seems to deny death or view death as a failure. Conversations about death and dying are difficult. Bringing up the topic of dying can trigger a range of emotions, interpretations, and concerns.

But having their last wish fulfilled not only helps their loved ones go in peace but also may be viewed as a final closure to their lives on earth.

That was the situation 71-year-old woman, Ng Yuet Hay, a Singaporean, had to grapple with after she was diagnosed with Stage 4 pancreatic cancer in July this year.

When doctors told her she only had a few more month to live, a thought ran through her mind. She wanted to see her son, Chia Fu Yong’s wedding.

Chia,35, had initially planned to hold his wedding next year, but to fulfil his mother’s wish, he decided to bring forward the date.

“I was afraid she wouldn’t be able to see me wed,“ he said, adding he was not in the position to say how much time his mother had left.

Well, it is every parent’s desire to see their children grow up and get married. Chia did not want to live to regret and decided to act fast.

He told his friends about his mother’s wish. They referred the mother’s dying wish to Ambulance Wish Singapore (AWS), a non-profit organisation whose mission is to create positive end-of-life experiences for terminally-ill patients.

AWS was able to carry out Ng’s wish to attend her son’s wedding on Oct. 10, along with the support and contributions of their volunteer Yoke Ling, Caring Hearts Nursing, Comfort Ambulance for to getting Ng to her son’s wedding.

AWS posted about the wedding in the Facebook. It generated a huge traffic on AWS page, with many pouring their hearts’ feeling and blessing the newly-weds and the mother for being so fortunate to see her son’s wedding.

“The sweetest moment was when a beaming Mdm Ng joined the guests in applauding for the newlywed couple the moment they were pronounced husband and wife,” wrote AWS.

AWS’s page was splashed with photos of the wedding, clearly showing Ng enjoying the wedding reception from a mobile bed/stretcher. She was appropriately and elegantly dressed in a cheongsam with colourful embroidery as she watched the goings-on.

1yo toddler shows off impressive swimming skills like a pro swimmer