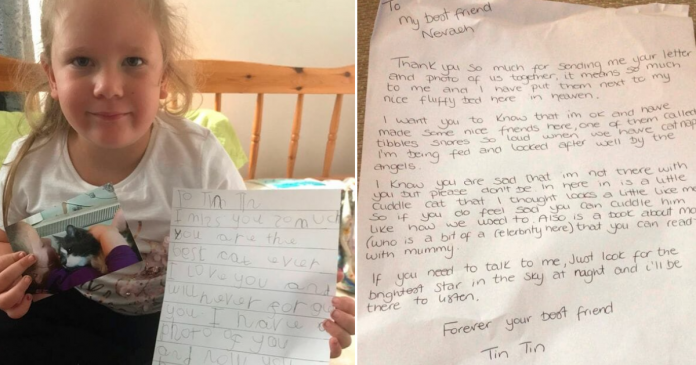 Our pets provide us unconditional love and acceptance. They greet us at the door when we return home, acting like we are celebrities. And when they die, the impact is profound and at times can be overwhelming.

Although animal experts say feeling devastated over the death of a pet is a normal and healthy was of grieving, saying goodbye to a beloved pet is always difficult for everyone, but for children, it can be even worse to get through the grief.

Now get your tissue box ready as the story that is about to unfold is going to choke you into tears.

Five-year-old Nevaeh Lowe from Walton-on-Thames was left devastated when her beloved pet cat and best friend named Tin Tin had to be put to sleep due to heart failure on Sep 7.

They had a close bond, and from the very start, they were inseparable friends. Nevaeh’s mom,36, Tamara, said: “Whenever they saw each other they were so happy.”

Nevaeh had a hard time adjusting to life without her buddy. She was struggling to sleep and her mother was getting worried as the death of Tin Tin seemed to be affecting the daughter’s health.

But Neveah was more worried that Tin Tin would be alone in “cat heaven”. She decided to write a letter to Tin Tin with “the brightest star in the clouds, heaven” as the address, to make sure her beloved cat is doing fine up there even though her mother told her that heaven might be too far away to send a letter.

Concerned about her daughter health, Tamara went along and they dropped the letter in a letterbox. That was a life changing experience for Neveah.

In the letter, Neveah penned: “I miss you so much, you are the best cat ever, I love you and I will never forget you.” She also included a photo of them together for Tin Tin to keep with a post-script, reading: “I have a photo of you and now you have one too, love, Nevaeh.”

When they dropped off the letter, they didn’t expect anything to come back but for Neveah it was important to her to say a proper farewell. Sort of a closure to the episode.

Unexpectedly, they received a parcel in the post a week later and Neveah was not only overjoyed but was over the moon!

Apparently, a postman at Royal Mail spotted the letter and wrote a reply back to Neveah.

In the letter, the kind-hearted postman, a cat lover himself, wrote a message from Tin Tin, explaining that Tin Tin had to go to heaven and Nevaeh didn’t need to worry about her. He even sent her a toy cat and a book to read with her mom whenever she missed the cat.

The letter ended with a note that lifted Neveah’s joy further. “If you need me, just look for the brightest star in the sky at night and I’ll be there to listen. Forever your best friend, Tin Tin.”

The letter was more than just a consolation. It was a “medicine” that enabled Nevaeh to get over the loss of her cat.

According to her mom, Neveah is a lot happier now, sleeps well and, yes, she would often look at the night sky for the brightest star and bade goodnight knowing that it was Tin Tin who is looking back at her, protecting and keeping her company from the above as she went off to sleep.

Man graded cheating ex-girlfriend’s apology letter who claims that she was...