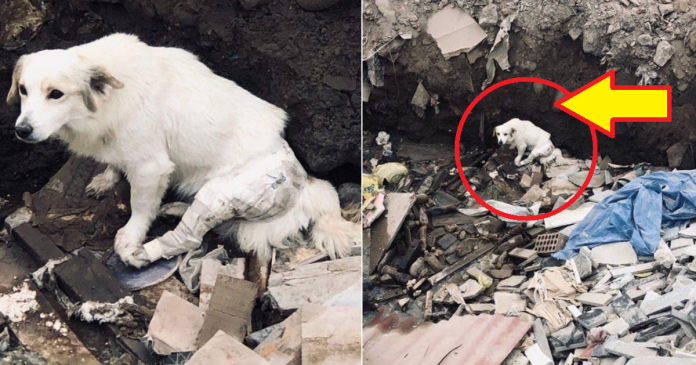 Dogs are to be cherished – not thrown out like garbage when they are sick or unwanted. It’s always shocking to see this level of disregard for animals — in this case literally throwing away his or her pet dog like trash into a dumpsite.

Looking helpless and vulnerable, the dog was obviously left to die in mounds of trash with its wounded hind leg wrapped in some kind of gauze.

Perhaps, the dog, which looked dirty, was waiting for someone to help her out of the horrible looking dumpsite.

Luck was on the dog’s side when she was spotted by a group of neighbours in the suburbs of the Peruvian capital of Lima.

The group saw a car stopping by a landfill near Villa farm in Chorros. The driver got off, and dumped something into the pile of trash.

Out of curiosity, the group went closer and discovered that it was a dog with a bandaged hind leg.

The dog was obviously scared and it took some cautious approach by the group to gain the dog’s trust by offering her some water and food.

Looking at the condition the dog was in, the group tried to comfort her without hurting her. Although they could not figure out why the owner took all the trouble to drive up to the dumpsite to abandon his pet, they were sure that the owner was in a hurry, perhaps not wanting to be spotted doing the cruel act.

They contacted a local animal rescue group as the group was not in a position to take her home.

The rescue group acted swiftly and saved the dog from the dumpster. As the dog was nursed back to health, a local online media, Caridad Perú, in splashing a story in its Facebook page about the “dumpster dog”, exhorted the community to help meet the dog’s medical bills and urged them to adopt the dog.

The heartless person who dumped her is still out there. It’s just unfathomable the cruelty that people can bring onto animals.

Having a pet at home means having the enormous responsibility of caring for the pet and protecting the animal that lives to shower its unbridled love to the owner.

Unfortunately, the reality is different. There are people who are not prepared to take care of a pet and abandon it in the worst circumstances without taking into account that there are multiple options open to them, instead of “dumping” the pet.

Fortunately, the dog which was rescued is now in a new home. Thanks to Caridad Perú for running the story which was shared on social media, leading to its adoption.

Let’s remind ourselves that there are always ways to help an animal in distress and together we can make a difference.

Goldie tried to save his little owner from his furious mother...