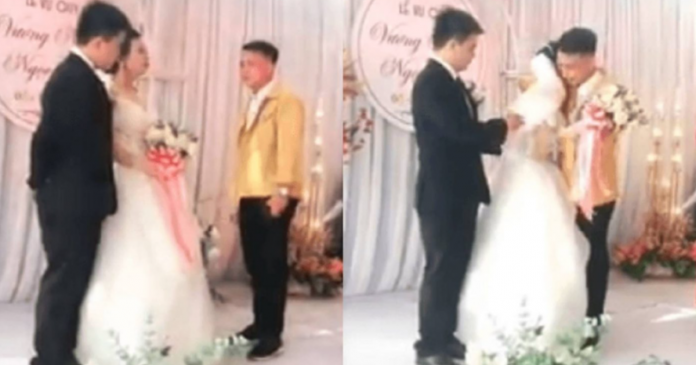 This is one wedding reception that all guests present will never forget… and keep talking about.

Every woman dreams of having the perfect wedding, marrying her one-and-only love, and celebrate the most memorable event with her family and friends. This is the one occasion that both the bride and groom meticulously prepare for, exerting so much effort, taking much of their time, and spending a lot of money to make the event memorable and successful.

One particular wedding, however, went viral online, and images were shared on various social media websites.

The bride’s ex-boyfriend attended the reception and surprisingly made a dramatic scene that instantly went viral online. He cried in front of the bride and groom!

In the viral video, you will notice a man in a yellow suit who, assumingly, is the bride’s ex-boyfriend.

Upon seeing the bride and the groom at the reception, the ex-boyfriend could not contain himself much longer and began to cry so much in front of them. That particular moment garnered mixed reactions and snide remarks from the people at the reception. People who were able to view the photos and video online could not help but be astonished at why the bride could not contain herself too and began to cry on which is supposedly her dream celebration.

People were saying that it may have been a fixed marriage, that the bride loves her ex-boyfriend more than the man she has married. It seemed that the bride and the other man still has deep feelings for one another.

Although the audio on the video was not too audible, many people said that “action speaks louder than words.”

It was very clear in their actions that the bride and the ex-boyfriend had something going on during their conversation, while the groom simply looked on.

The bride was still crying as the man in the yellow suit hugged her tight, as if saying goodbye to her. At this point, the netizens have noticed that the groom did nothing but kept his decorum, by being patient and understanding, which has gathered praises and admiration from the public.

This event left many people feeling confused. Many of them also commended that the two men were very civil about the unusual situation, especially on supposedly the happiest and most memorable celebration of the bride and groom.

Here is the video of the said event.