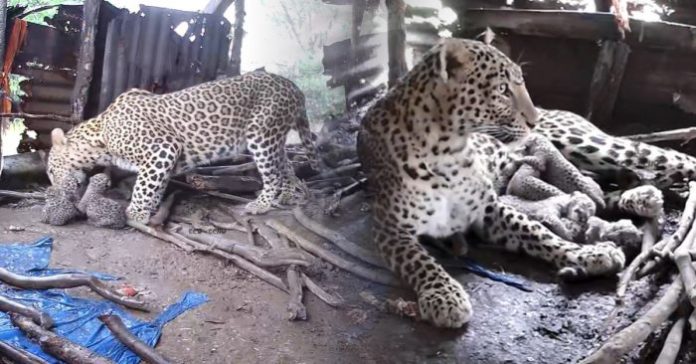 Animals are no different from us. They too need a safe place to live and raise their families. Mothers usually have an instinct to take responsibility for their children, making certain that their children are safe from whatever circumstances.

This mother leopard is the same. She was willing to do anything to keep her little ones safe, even if it means going into unknown territory and seeking refuge in a storage shed.

The animal left the comforts of her home in the forest to find a place to give birth as the heavy rain due to the rainy season made it quite dangerous.

Realizing the dangers such as her children who may get sick due to the weather, the mother leopard entered a shed before giving birth.

This action was noticed by the farmer who owned the farm where the shed was in. He proceeded to contact the forest rangers about the animal.

Animal protection group, Eco Echo, soon arrived at the scene and moved to install cameras in the shed so they could monitor the situation from the outside.

When the work was done, the mother leopard was nowhere to be found. Only four of her cubs were left in the shed.

Eco Echo advised the locals not to panic if they ever see the mother leopard and soon the animal appeared, seeming to have went out on a hunt for her children. A chicken was clutched in its jaws.

Local authorities then sent several workers to continue monitoring the condition of the leopard so as to assure the safety of the locals. They also made effort to care for the animals and making sure no one would bother them.

Almost a week later, the leopard finally brought her children back to their homes into the forest after the heavy rains subsided.

Everyone was relieved that everything went well and nothing dangerous happened.

Although the locals did lost a lot of their livestock and pets, they were happy to be able to help the feline family.