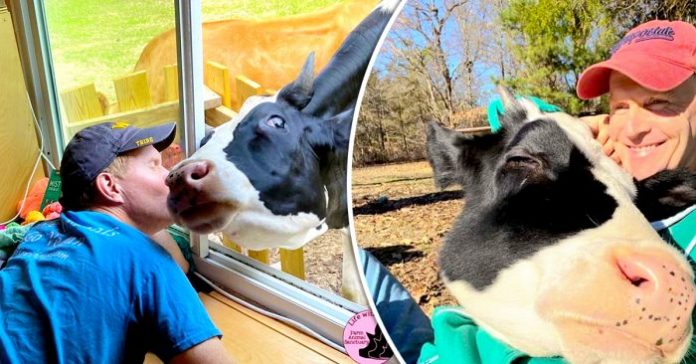 She’s an adult cow but still a baby at heart. ❤️

Rescue cow Jenna was still a 3-days-old calf when she was adopted by Ryan Phillips and his fiancée Mallory Sherman. Little did they know that she was going to grow up into an adult “baby” cow! She still fits in the back of their Subaru Forester when she first came home with them, but when she grew up to be a 1,000-pound cow, she was still, literally, a giant baby… still eager to get morning hugs from her dad every single day!

When Jenna was born, she had a twin brother. That makes her a “freemartin”, a sterile female calf who has non-functioning ovaries, therefore, unable to produce offsprings. Since the dairy companies had no use for Jenna, her dad, the founder of Life With Pigs Farm Animal Sanctuary, thinks she is very special.

“Jenna’s personality has always been as full and vibrant as she seems today,” Phillips told The Dodo. “Because I spent 24 hours a day with her… I think she thought she was another human and has this attitude that anything she wants to do, she can do it with me.”

Always craving for attention, Jenna playfully hassles her humans. She lets them know if they don’t spend time with her, peeking through windows to find them anywhere inside the house.

“Jenna would peek through windows and moo to us non-stop until we come out to hug her, or scratch her, or play around the yard,” Phillips said.

Jenna refuses to give up her morning hugs with her human dad because she has treasured them since she was just a calf, even now that she has grown to be entirely larger than him.

“One of her favorite things from early on would be to put her head up against my leg and push it into it while I wrap my arms around her neck and scratch her,” Phillips said. “That’s her way of hugging… sometimes it lasts up to 20 minutes of her needing this cow-version of a hug.”

In most days, Jenna has been spending more of her time with her adopted cow-sister, Maisie. But, her human Dad doesn’t forget to give her kisses.

“They have tongues that are kinda like cat tongues but they’re huge and a lot more forceful,” Phillips said. “It’s pretty rough, but you learn to love it because it’s their way of expressing that you’re part of the herd.”

Jenna is one lucky cow, though quite demanding. Her human parents never cease to make her feel very much loved through their kisses and hugs morning, noon, and night.

“Fortunately, she’s so cute that we’re happy to always give in to her demands,” Phillips said.

To help other rescued farm animals like Jenna, you can make a donation on Life With Pigs Farm Animal Sanctuary’s website.

Here is a short video about Jenna and her human parents.