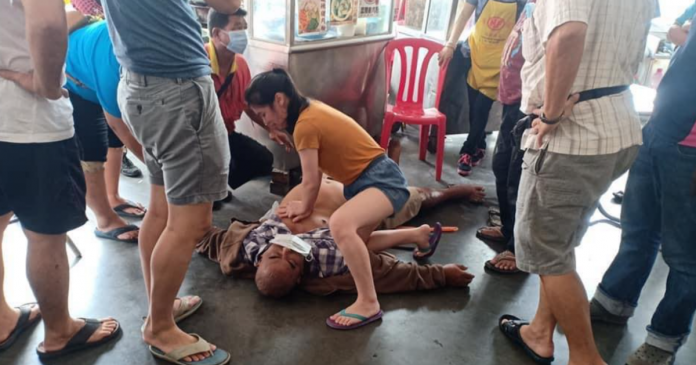 A woman who performed CPR on a middle-aged man couldn’t stop herself from crying when the man died.

Not very often do we see such people with kind hearts. A woman from Bahau, Negeri Sembilan has proven to everyone that there are still people out there who are selfless, by helping someone in need.

On Saturday, the 12th of September, around 3:00 in the afternoon, a middle-aged man was eating in a coffee shop in Taman Acbe, when he suddenly fell unconscious. A young woman, who is a medical student, immediately rushed over and started performing Cardiopulmonary Resuscitation (CPR) on him.

Upon the arrival of an ambulance and its medical personnel, the young medical student continued to perform CPR. Unfortunately, the man passed away and was pronounced dead. According to Sin Chew Daily, the body of the deceased man was sent by the police to the mortuary for an autopsy. As of today, the cause of death is still unknown.

The young woman could not contain herself further and burst into tears upon hearing of the man’s passing.

In a Twitter account, however, netizens’ comments started pouring in and praised the young woman’s bravery for saving a man’s life. She was then reassured that the man’s passing was not her fault.

“She did the right thing. Imagine if you had to perform especially during a pandemic like now. Why are there so many “first-aid experts” at the comment section? I hope to have someone as calm and brave as her helping me should this unfortunate thing happen to me,” a Twitter netizen commented.

People like this young woman deserves praises for her kind-heartedness and bravery. Not many people would stand up and do a brave gesture as she did. Let this story be a reminder to all of us there are still people out there who will lend a helping hand when we need them the most.