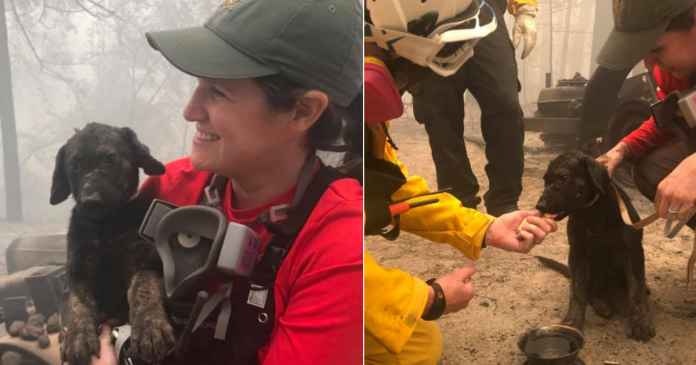 Nobody expected to see a cute puppy survive a Wildfire that recently raged throughout California, which has been recorded as the largest wildfire, so far, in the state’s history.

With 3.3 million acres of land across California destroyed by almost 8,000 fires burning, this has been the largest recorded raging wildfire in the state.

It was September 11, when firefighters, deputies, and members of the Butte County Sheriff’s Office Search and Rescue team head over to Berry Creek and searched through scorched properties damaged by the fires. What they did not expect to find was an adorable and furry puppy just waiting for them to rescue him.

It was a miracle that this cute little puppy survived! They found out that he was left behind by his owners, probably, because they couldn’t find him and left immediately when the place needed to be evacuated.

“After doing some investigating, we found out that the owner of the property has several dogs and was not able to locate them all before needing to evacuate,” the sheriff’s office wrote on Facebook.

The BCSO deputies have decided to call the adorable puppy, “Trooper.”

Other than having some minor burns and charred fur, the little bundle of joy was just fine. He was then taken by the Animal Control and brought to Valley Oaks Veterinary Center in Chico for further check-up.

Although everyone in the area was sad to see him go, Trooper will always remain in the hearts of all who have felt the happiness that the “miracle puppy” has provided that day.

Trooper is safe now! The poor pup must have been very scared, running and hiding from the scorching flames of the wildfires. But, now he is in good hands, resting in the veterinary clinic. Hopefully, he will be reunited with his owners very soon.

At this point, we all would like to express our utmost gratitude to all volunteers, first responders, and firefighters who do everything to protect all communities. While California wildfires continue to rage, we would like to extend our appreciation to people who are risking their lives to save everyone.

Little girl sleeps with her kitty since the day they first...