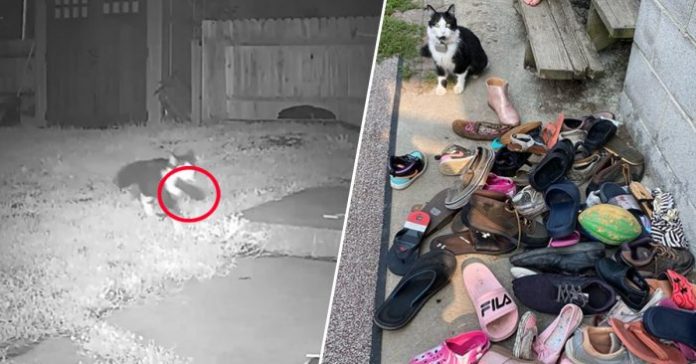 Cats have been known to have so many activities throughout the day, even at night. They love to roam and view different sights everywhere, they go hunting, pick out fights with dogs, and more. But a certain cat has dedicated itself to a life of thievery! This is Jordan, a black-and-white feline who does his ‘thieving activities’ at night. Nothing surprises the whole neighborhood more than a cat roaming at night stealing shoes at the their homes and finding them in another person’s place… his owner’s backyard.

Much to her chagrin, Jordan would sneak out at night and steal her neighbor’s shoes and is often seen carrying them with his mouth upon returning home. According to Ross, she has shared Jordan’s activities on a Facebook group page on the intention of returning the stolen shoes to the rightful owners.

“If y’all know my cat Jordan, y’all know he loves to bring me home shoes!” the cat’s owner wrote in the group.

It was January when Ross had noticed that the stolen shoes in her backyard have been increasing in numbers. Initially, she wanted to throw them away, thinking that Jordan must have stolen them from some junkyard until she realized that they were ‘gifts’ from Jordan.

“Jordan would bring 1 to 3 pairs of shoes every day. Even if he carried them 1 shoe at a time, he would go back to the same location he stole them from and bring the other shoe.”

“We have about 80 pairs of shoes and also baseball gloves, elbow and knees pads, toys and even bathing clothes,” Ross said.

Wanting to know where Jordan goes for his nightly adventures, Ross decided to attach a GPS tracking device on him. She even had CCTV cameras installed at the back of her house for more evidence.

According to the GPS tracker, Jordan can walk 7-8 miles a night with multiple visits to different houses in the neighborhood. This proves that Jordan wanted to present his owner with complete pairs of shoes, but then could only bring 1 shoe at a time. But for Jordan to prepare for his nightly adventures, he sleeps for hours during the day.

So far, Ross managed to find only one owner of a pair of shoes stolen by Jordan.

“Jordan managed to steal 6 pairs of shoes from him only! At first, he did not believe that it was a ‘work’ of a cat. He thought his son was lying,” Ross exclaimed.

Hopefully, with the help of the social media group page, Ross would be able to return all the stolen shoes to the rightful owners.

Here is a video of Jordan and a portion of his nightly thieving escapades.