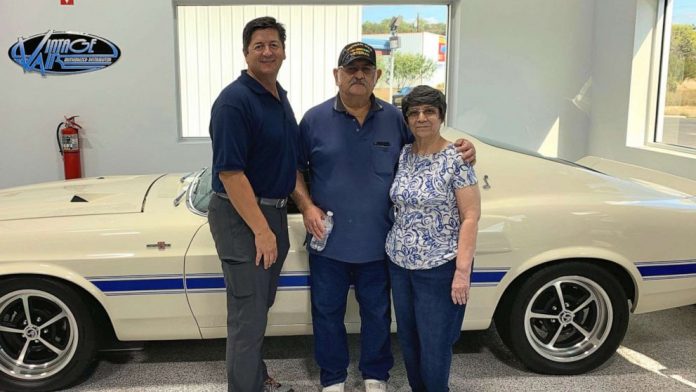 When it comes to retirement, there are people who have to put off the thought as they still have mortgages and other commitments to pay every month.

69-year-old auto mechanic Albert Brigas was one of them until his generous employer paid off the mortgage on his home.

Brigas worked as an aircraft mechanic in the Air Force before he went on to work for Rudy Quinones, owner of Renown Auto Restoration in San Antonio for the last 13 years.

Like many of his peers who dream to retire after they successfully settle their mortgages, Brigas also wished the same.

As he had only a few months left on his mortgage to pay off the house he has been living in for 24 years next, Brigas told Quinones last September that he wanted to retire next February.

However, his kind-hearted employer did not want him to wait any longer to retire comfortably.

The two men later met at the bank where Quinones paid off Brigas’ mortgage as he promised.

According to Quinones, he decided to pay off Brigas’ mortgage as a tribute to the man’s years of hard work and loyalty.

“Albert is a humble individual, extremely hardworking, would give the shirt off his back to anyone,” Quinones told GMA.

“His family was very close to our hearts and the fact that he gave us so many loyal years of service, he’d come to work sick, he never came in late, he is just one of those guys that had so much pride in what he did.”

Thanks to Quinones’ generosity, Brigas is now just days off before he officially retired after decades of service. He hopes to spend his retirement days playing with his two grandchildren.

As for Quinones, he hopes for Brigas’ story to inspire employers and managers to give back to employees who put “so much heart into their work.”