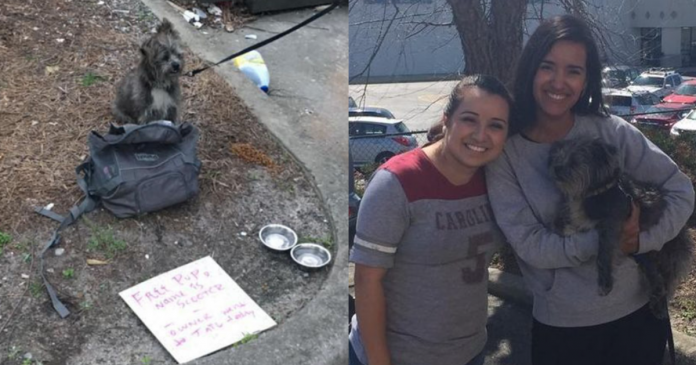 It’s hard to think how anybody could do such an upsetting act but reality is cruel.

One afternoon in South Carolina, a dog was found tied up to a dumpster outside a parking lot at a local mall. A note was found next to it that reads: “Free pup. My name is Scooter. Owner went to Jail Today.”

Two women, Bianca Cushman and her cousin stumbled upon this unfortunate sight just when they were leaving the mall. Having no heart to leave, they took it upon themselves to spread the news about Scooter’s situation on Facebook.

In no time, everyone on the internet heard about Scooter and it reached the ears of a particular woman named Paula Langford, who happens to be the founder of a local foster-based rescue group called the South Eastern Homeless Animals (SEHA). Paula heard about the pooch and went to pick him up.

One would think the owner was the one who abandoned Scooter as it isn’t uncommon for pet owners to resort to that, for reasons such as not being able to properly care for the pet or they simply did not want them anymore. However, that is not the case for Scooter according to Langford.

After scanning his microchip and doing a lot of digging, Langford was surprised by what she discovered. Scooter had gotten lost twice before at Colorado and Florida, but now he’s all the way out in South Carolina. Not only that, but Scooter’s owner was also there with him at the shopping mall parking lot on the same day before getting arrested.

Paula revealed her findings saying she found out that the owner was worried Scooter would be sent to a shelter and thus prompted him to hand over everything he has and his beloved dog to his friends and asked them to ensure Scooter’s safety. Instead of following his wishes, they simply left and abandoned him.

Finally knowing the truth, Paula wasted no time to get in touch with Scooter’s family. It wasn’t easy but she managed to get in contact with the owner’s mother in the end. The mother gladly agrees to take in Scooter and after a long journey, the pooch is reunited with his family at last.

Share this wonderful journey with your loved ones and fellow animal lovers!