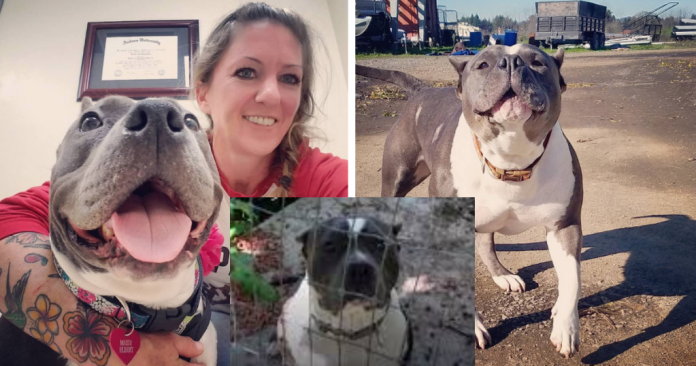 Just because Maisy the pit bull could not get pregnant, her previous family treated her like an outcast by keeping her in isolation outside the house with limited human interaction. Maisy’s home was a dirty and smelly kennel.

The pit bull’s family wanted to put Maisy to sleep as they felt a pit bull that couldn’t even give them a litter of pups in spite of efforts to get her impregnated was useless and a sheer waste of money to feed her.

Three long wretched years life in the kennel was hard and lonely for Maisy until a family friend stepped in and got Maisy to an animal rescue shelter.

When she arrived at the animal shelter, her picture was posted on social media. It was spotted by Marisa Elbert who immediately took a liking to Maisy as she felt the pit bull could help fill a void in her life.

Marisa was still recovering from the pain of losing three lives close to her all within a year — her 13-year old pit bull, her dad and mom.

“I needed something to cheer me up,” Marisa said, explaining Maisy’s woo-ing was something that made her adopt the pit bull.

“She does it when she’s extremely happy or excited. She’s so chatty and we talk all the time, every day.”

Having Maisy around was a healing process for Marisa who managed to get through her toughest times.

Maisy is such a busy body and wants to have a say on everything she sees with her “woo, woo, woo” trademark. Marisa joins in as if the two of them can really understand one another!

Not only did Maisy get an entire human family complete with kids, she also got a same-species best buddy named George, inherited horse friends on her new farm, and even made friends with a feline pal too, named Motor!

It must be an amazing experience to have so much interaction and affection in her life after long years of loneliness.

Marisa said Maisy is a perfect model of how to live life with happiness, excitement, and humour.

Well, Maisy, it looks like you and your mother have found a happy ending.

Marisa documented her adventures with Maisy, along with her other pets, on an Instagram page where she gained over 106,000 followers.Her video on Dodo Channel on You Tube had more than 11.8 million views