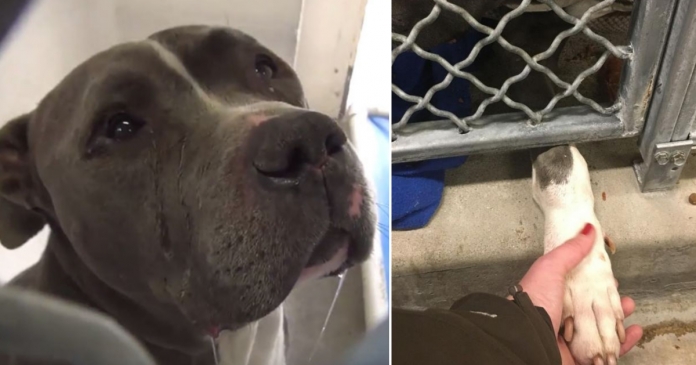 Howwrroooooooo!!!! Sad, lonely, anxious or bored — dogs that aren’t happy when you leave can make a lot of noise trying to let you know! Separation anxiety takes many forms, and has many different levels of intensity. Our canine companions may cry, howl, bark or otherwise vocalize when they feel abandoned.

It’s not fully understood why some dogs suffer from separation anxiety and others don’t. But in the case of Blue King (or Blue), a pit bull, it is pretty obvious why he started crying the moment his owners dumped him at a high-kill shelter in California as they could not take Blue along to their new home.

Since Carson Shelter is a high-kill facility, if animals aren’t claimed or adopted, they’re euthanized to offer a spot for new arrivals.

Blue faced that terrible “death row” possibility. Alone in his kennel, he continued to whine with despair, echoing through the refuge. He had a difficult time with the solitude and fell into a deep depression.

When Blue first got to the shelter, he couldn’t understand why his owners left him there all alone. All he wanted was to be back with them. So he expressed it in the way most dogs would do – vocalize his separation anxiety through cries in the hope his owners would return and take him back.

How dogs think and feel has become a platform for scientific research, with studies confirming dogs share with human feelings of pain, sorrow and even depression. They also understand human speech and its meaning, plus form deep, loving relationships with their pet moms and dads.

After a few days at the shelter, Blue came to realize that his owners had dumped him for good. He would snuggle in the corner of his kennel and cry real genuine tears. He was devastated.

The staff at the shelter noticed how miserable Blue was and tried to console him. They gave him treats, talked to him, took him on walks, but sadly nothing seemed to help the dog overcome his family’s absence.

Eventually, some members of the staff noticed Blue’s more-than-sad face and decided to help the pooch. They shot a video of the heartbroken pit bull and uploaded it to Facebook, hoping someone would adopt him before he is put to sleep.

Blue broke everyone’s hearts. Jennifer McKay, an animal lover, saw Blue’s teary eyes and knew she had to do something to help him.

The next day she came by the shelter. “He looked very sad and depressed,” McKay said, adding Blue wouldn’t even acknowledge her at all while all the other dogs were making eye contact and wagging their tails as she passed by.

“He wouldn’t even stand up or come to meet me and I could tell that every time someone walked by, it was like he was looking for [his family],” McKay said.

She made up her mind to adopt Blue, and after the dog passed the temperament test, a week later she filled up the adoption papers and took Blue home. As soon as they were outside the kennel, an irrepressible joy took over. The dog showed a completely different side of himself, full of energy and enthusiasm.

“He kind of tricked me. I was expecting to get a really laid back, chill dog, but as soon as the gates opened in the kennel, he was super excited. And he loved riding in the car. He wanted to stick his head out the window, “McKay said.

People following the post were thrilled to hear the good news. One reader wrote: “OMG…this just breaks my heart. His family should be ashamed of themselves. Thank God he has been adopted. Hope they spoil him with hugs and kisses every day.”

After he left the shelter, Blue King became a new dog. His new owner says that Blue loves sleeping, belly rubs, cuddles, and gazing into the mirrors.

“He’s obsessed with looking at himself in the mirror,” McKay said, adding she was super excited to have Blue be part of the family.

Blue still has a lot of learning to do (including the basic commands and walking on a leash) but McKay says that the once-shelter dog is going to be fine.

Blue’s road to recovery was still long and nowhere near complete, but at least he was off for a good start in a loving environment. Now, thanks to the endless love he got from Jennifer, Blue learned to trust humans once again. Another person who commented on the post summed the whole moral of the story.

He wrote: “People who discarded a dog with little thought probably shouldn’t have pets! Pets are a commitment for the life of the pet. His tears and crying broke my heart but so happy he has a loving forever home!”

The bond between man and dog is enduring, a lesson for those who devalue the loyalty of their canine friends.

They see us humans as their world, their pack member, their family and the source of everything interesting and amazing. Thus it comes as no surprise that many dogs cry when you leave, even if it’s just for an hour.

This heart-breaking story of Blue, who cried himself to sleep is a classic illustration of what happens to abandoned pets after they are deserted.