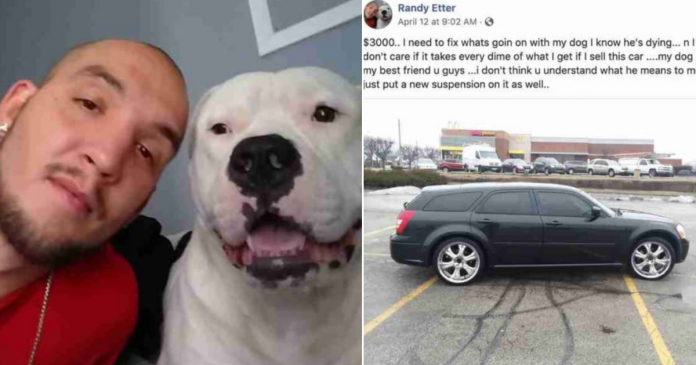 Many men find their relationship and attachment to their dog to be more secure than their closest human relationships, according to a research by US psychologist Dr Chris Blazina. In the research, Dr Blazina analysed a number of studies to further understand how bonding with a pet can enrich men’s lives.

Take the case of Randy and his beloved pit bull, Gemini. He considers his dog more than his best friend, for him Gemini is his family.  They have been together since Gemini was a puppy. Their worlds revolve around each other, and they love each other very much.

So, when Gemini recently got sick, Randy was so desperate that he even put his car up for sale to save his dog’s life.

Gemini’s problems began after he spent some time playing with Randy and his girlfriend’s baby girl. The little girl would throw her milk bottle out of her playpen, and each time that happened, Gemini would fetch it like a good boy.

And from that moment the dog began to get sick. “He started to slow down and I didn’t think that was normal,” Randy said, adding the dog would just lay beside him and follow him everywhere.

Then, things started to get worse. Gemini started throwing up. Randy knew that he had to get immediate help for his dog and do whatever it took to make sure he got better.

What Randy didn’t realize, was that Gemini had actually ingested some part of the bottle, and that was what was causing him to be sick.

Randy took the dog to a veterinarian. But the vet couldn’t determine what was wrong with Gemini.

Randy was determined not to give up and drove from one vet to another. He was so busy with his dog that he ended up losing his job. However, he was still fighting for his friend.

He admitted that going through this with Gemini was actually one of the scariest moments that he’s ever experienced.

Thankfully, Randy was able to eventually find a vet that got to the bottom of the problem when a diagnosis showed that Gemini had swallowed a portion of the bottle, and that was what was causing a painful blockage.

Gemini would need to undergo a surgery, the vet said but Randy did not have the $4,500 needed for the surgery. Determined to keep his best friend alive, Randy made the decision to sell off his car to raise the money.

“I don’t care if it takes every dime of what I get if I sell this car,” he pleaded on Facebook, continuing, “my dog is my best friend u guys … i don’t think u understand what he means to me.”

Randy sweetened the deal by explaining he had just put a new suspension on the vehicle.

His love for the dog caught the attention of the public, with many people sharing the post across social media.

That is how Street Outreach Animal Response came to know about Randy and Gemini. The outreach group posted Randy’s heart-breaking story on its Facebook page. Randy was blown away by the kindness that came next.

With the help and kindness of others, Randy was able to not only keep his car, but was able to get Gemini his life-saving surgery.

Gemini made it through his surgery without complications and is in good health. The inseparable friends continue sharing adventures together.

It is proof that the bond between animals and humans transcends the ordinary.