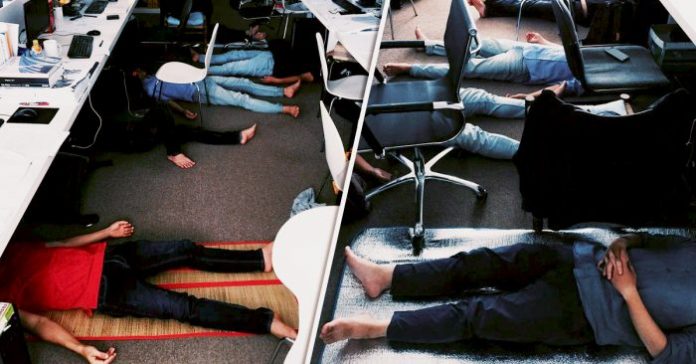 Sleeping while on duty is considered a sign of laziness, lack of disciplines in most workplaces in the world, however, in some particular cultures or companies, taking a nap during office break time is acceptable. There are even researches that conclude that taking a quick nap during office hour will further boost productivity of the employees.

Japanese are known for being hardworking at work and working overtime is almost a norm and informal rule. When they are assigned to other countries to work, they may the working culture is more relaxing abroad.

The same situation happened to a young Japanese guy named Yamada Annettai. He was recently assigned to work in Vietnam and he shared on Twitter some very interesting pictures of his Vietnamese colleagues sleeping on the office floor during break time.

During lunch hours, his colleagues will take off their shoes and lie on the floor to start their sleeping ritual.

Not only that, many of them who are serious about hygiene also bring their own mats to sleep during breaks. According to Yamada it is a common thing to do in Vietnam.

However, Yamada felt that this is a culture shock for him. As every time when he enters the office after lunch break, he feels like he is entering a military hospital full with sick patients after fighting a war and he feels very lonely in the quiet office.

After Yamada posted the pictures on Twitter, many Japaneses responded: “Wow, I also want to sleep like this during lunch break”, “Cool, I want to work in this company!”, “All companies in the world should practice this to allow employees to sleep during lunch breaks”.

What do you think? Can you accept your colleagues to sleep like this on the office floor? Tell us your opinion!