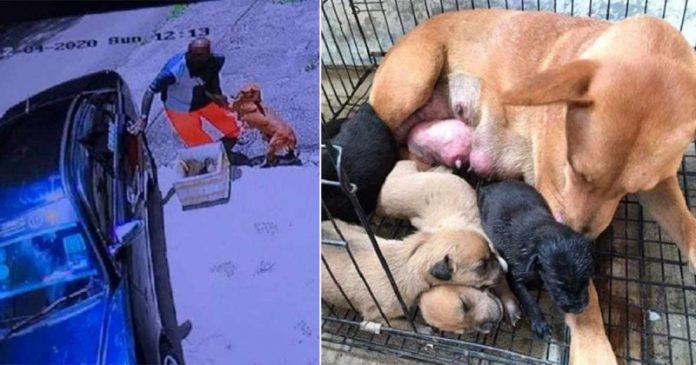 We shared a heartbreaking viral footage recently about a mother dog was seen pleading a man to not leave her and her puppies behind in front of an animal rescue shelter.

It was as though she was begging him anxiously to not abandon her and her puppies there alone. Unfortunately, her plea didn’t work. The man eventually drove away.

Many Facebook users have voiced their angers towards this man who had financial difficulty at that time so we thought of giving you guys some update of this story.

According to the chairman of the shelter, the man in the video has called him personally to apologize and to explain that he felt very bad for the dogs and wanted to find them a home. Instead of dumping them on opened road, he chose to leave them in front of the stray dog home.

The chairman said he has forgiven the man and said that the man deserves another chance as times are hard now and they are worried that the man’s livelihood will be affected.

They can’t deny that the man is actually good-hearted for leaving the dogs in front of the shelter instead of somewhere else but the shelter is going through some financial difficulties too.

The shelter staff sent the mother dog to the vet and the vet found that she is actually free of breast cancer but they found pus in her uterus (pyometra). The vet prescribed some medicine to her and she should be doing just fine now. Unfortunately, the shelter confirmed that two of the puppies have passed away.

The dog shelter wrote in their facebook post to pledge for more donation: We have No more money ! Our shelter 1000++ Furkids are currently facing serious crisis of food out of supply ! We are under very serious economic crisis during this mco (coronavirus lockdown) period ! Donation dropped drastically.

We hope this is a happy ending for the mother dog and her puppies. Hopefully the shelter is able to get more donation to feed the stray dogs under their care.

This nervous penguin tries to jump off the diving board but...