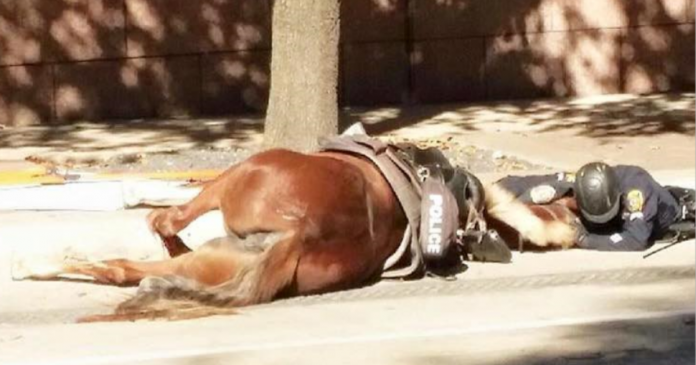 Day after day, we are assured of the unlikely but beautiful bond animals share with their human companions. From dogs who loyally wait for their deceased owners to birds and reptiles which portray humanly gestures, it’s becoming more and more established that animals are just as capable of connecting with humans.

Charlotte was a charming 6 year old Tennessee walking horse. She was serving in the police brigade for Houston Police Service. On one of her usual traffic patrol, she was met with an unfortunate fate.

A loud noise behind her frightened her, causing her to sidetrack to the left of the road. Unbeknownst to her, or her partner Officer D. Herrejon, a cement truck had been right behind them and within seconds, Charlotte’s hind leg was stuck in one of the wheels of the large vehicle.

She sustained a broken leg and lost her side, causing Officer Herrejon to fall to his side. While he was ushered to the hospital, Charlotte lay there unable to move, counting her last moments.

That’s when Officer Ronald Curry, who arrived at the spot upon hearing the news, approached Charlotte and laid himself on the road next to her. He looked at her in the face and slowly started caressing her head.

The battered horse remained calm as she was being comforted, probably knowing there’s nothing much she can do anyway. He just accompanied her till the very end, gently running his hands on her mane.

The incredibly touching moment was captured on camera and posted on the League for Animal Justice’s Facebook page.

Charlotte had to be euthanized on the scene as her injury was too bad to be treated. Since then, the moving image had garnered the commends and appreciations of tens of thousands online.

The caption read, “We admire the heart & strength of this officer because as you know, when you lose an animal, to be with them during their last breath is a heartbreaking & tough thing to do.

The Houston Equestrian Brigade published their statement of condolence shortly after. Charlotte arrived at the brigade when she was 2, proving herself successful in all the riding programs conducted.

“She loved her job and was always ready to go to work putting the bad guys in jail or rubbing her nose against the kids. She served the citizens of Houston for 4 years. She will be missed,” the message read.