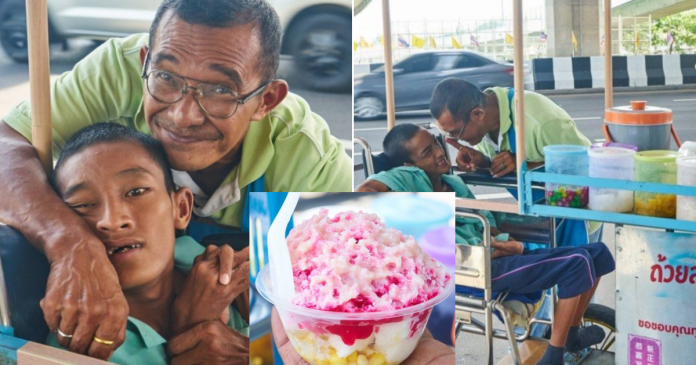 Life is like a roller coaster ride. It’s full of ups and downs that we have to endure. For this single father from Thailand, his journey had been filled with downs after his wife left him, forcing him to look after the welfare of their disabled son.

In order to cover his expenses and his son’s treatment, this man who if fondly called Uncle Dam by the locals makes a living selling local iced desserts in Bangkok with his son.

Every day, Uncle Dam would walk, pushing down his six-kilometer dessert booth to peddle his cart in downtown Bangkok.

Although he ventured into the job to finance the cost of his child’s medical treatment, Uncle Dam does not charge a high price for his sales. A generous bowl of shaved ice filled with various toppings like corn, jelly, bread, syrup and milk is only sold at $0.30! Isn’t it cheap?

At first, Mr. Dam sold his dessert for a slightly higher price, but his regular customers complained about the price. Thus, to ensure his business picks up among the regulars, he decided to lower the price.

For Uncle Dam, his son is the sole strength and motivation that gets him through most days. Uncle Dam shares that his son was born normal. However, by the age of eight, her son had begun to show signs of physical disabilities. Upon learning the child’s situation, his wife who could not accept the fact decided to run away from her husband and children.

This incident made Uncle Dam devastated that he had even attempted suicide. However, for the sake of his beloved son, the determined man strengthened his will to earn a living to cover their daily and medical expenses.

“I continue to live by focusing on what is present and reminding myself to always be happy. Past stories need not be repeated and we all need to find happiness in our own way. The future is unpredictable, so let’s not worry too much about it,” Uncle Dam told Wongnai.

It’s admirable that despite his unfortunate circumstance, Uncle Dam continues to be a positive ray of sunshine. We all can certainly learn a thing or two from him.