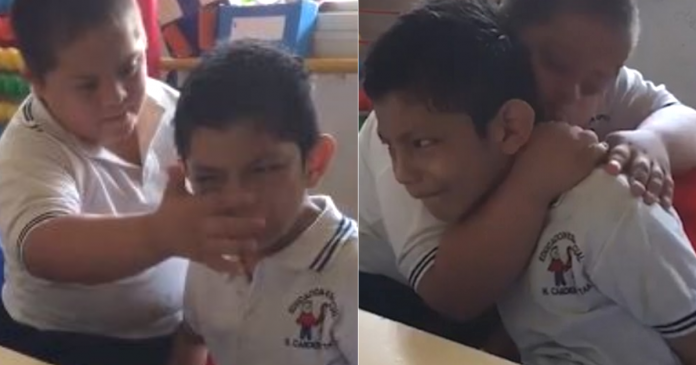 Nobody is born perfect in this world. We all have our own flaws and setbacks that every now and then reminds us to stay true to our ground. Just because someone is born physically perfect, it does not naturally qualify them as a perfect human being.

Sometimes, those with disabilities are more understanding and compassionate compared to others, like this boy with Down syndrome. When he saw one of his friends who was autistic, was having a rough day, he did something that is typically unexpected of special needs kids.

His classmate appear to look unhappy, and did not engage with the other students. Eventually, he started tearing up, reason still unknown. Watching his friend breaking down, the unnamed boy extended his hand to wipe the tears off his friend’s face and rub his nose.

Immediately after, he embraced him in a comforting hug and gave him a sweet kiss on the forehead. How adorable! The heartwarming scene was caught on video by their teacher during a classroom session in Mexico and posted up on Facebook.

The post has garnered more than 170k Likes so far:

The boys, clad in their yellow uniforms and heart full of kindness and love, stayed a while hugging one another before the kid with the Down syndrome proceeded to give a few pats on his autistic friend’s back.

It was as though he was letting him know that he understands what he’s going through and is there to comfort and share the uncomfortable feeling with him.

A moment passes, then the boy took his friend’s arms in his and starts waving them up in the air as soothing music plays in the background. The Down syndrome boy continues wiping the tears off the other boy as the video ends.

It goes on to show that how the boy who was cognitively unaware of humanly emotions and how they work can be some empathetic. He attempted not one, not two but a continuous number of gestures to cheer his friend all because he looked upset.

He never gave up until he knew the boy was feeling better. The video blew up on the internet for all the right reasons and people were very touched by the selfless act of kindness shown by a mentally disabled boy.

If you always consider yourself to be a better person than most, you might want to reconsider it. These boys and the admirable bond they share will surely change your perception of life. When all else fails, a hug and a shoulder to lean on will suffice.