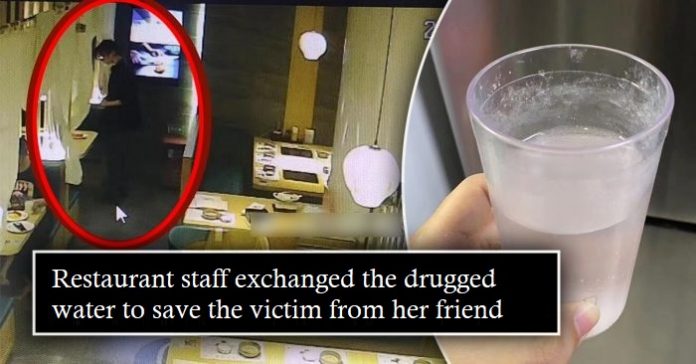 Whether you’re at a party or just hanging out, it’s possible that someone—someone you know or someone you don’t—may slip something into your drink that can hurt you. That’s why every individual needs to take care of themselves and be more vigilant when they are outside, especially women. This is because there are criminals around us.

Recently in China, a girl almost fell victim when her drink was drugged by a male acquaintance while they were eating at a restaurant.

The incident that happened on July 4 was actually shared through a Chinese social media platform.

It is understood that the man, Zhao Nanxi, had invited the victim to eat at a restaurant located in Shenzhen.

During the meal, the victim left the table for a while possibly going to the washroom. At that moment, she was alarmed by a male restaurant staff.

The staff told her that he saw Zhao had put some white powder into her drink glass as soon as she got up from their dining table.

Zhao was also seen immediately stirring up the drink using his fingers so that no one was suspicious of his actions.

Fortunately, there are people who are sensitive and caring. The girl immediately called the police before returning to the table and confronted Zhao.

After the incident, the girl asked about the drug and Zhao admitted that it was bought from the United States and was indeed used to delude individuals who consume it.

CCTV cameras installed at the restaurant clearly recorded Zhao’s malicious intent as well as the kind actions of the male employee to change the drug-filled drinking glass.

Meanwhile, the restaurant manager has instructed the male employee to accompany the girl home to ensure her safety.

The girl revealed that she met Zhao at an inter-university debate contest 4 years ago.

They met each other again as both of them participated in the debate competition this year. “Even though we have known each other for 4 years, I can’t believe that I become her target victim”, said the girl.