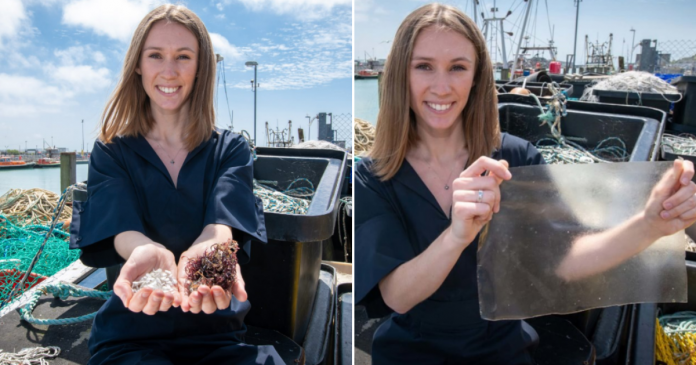 Single-use plastic is fast becoming one of the world’s major problems but an invention created by an innovative student from the University of Sussex may put a stop on our dependence on it.

Called Marinatex, the 100 percent biodegradable material is said to have a huge potential to replace single-use plastic.

The bioplastic was first invented by 23-year-old Lucy Hughes who created the new material out of fish scales, fish skin and red algae.

Unlike typical plastic that is widely used by millions of people at the moment, Marinatex can be decomposed within a month. It can also be disposed through ordinary food waste collections.

“With Marinatex, we are transforming a waste stream into the main component of a new product. By doing so, we have created a consistent, transparent and ‘plastic-like’ material with a more planet-friendly and product appropriate lifecycle for packaging,” Lucy said.

The material is also edible, creating a solution should it make its way to the sea and get eaten by the marine animals.

According to Lucy, she was inspired to create Marinatex when she was investigating about ways to reduce the amount of waste from the fishing industry.

That was when she discovered that fish parts left from processing fishes were actually reusable to make a safer alternative to plastics.

“Why do we need to have hundreds of man-made polymers when nature has so many already available?” she asked.

Thanks to her innovative and genius invention, Lucy was announced as the international winner of the 2019 James Dyson Award for design by the James Dyson Foundation on November 13.

According to Lucy, she is planning to use the US$41,000 prize money to further develop Marinatex and find better ways to mass-produce it.

The newly developed material was originally developed as part of Lucy’s undergraduate project but it seems that Marinatex could be the world’s answer to plastic pollution!