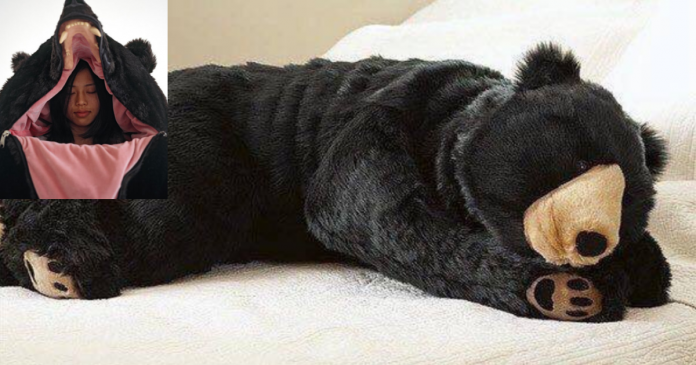 Having trouble falling asleep? Couldn’t bear the extreme cold weather at night? Wish you had thick bear-like fur to hibernate for as long as you want?

Well, now you can…for a slightly expensive price though. Japanese designer Eiko Ishizawa‘s art-imitates-life project is a sleeping bag that is designed to look like an actual bear.

Aptly named ‘The Great Sleeping Bear’, the bag was created as an ode to Bruno the bear. Bruno was the first bear in 170 years to be spotted wandering in Germany, believed to have originated from Italian Alps.

He was called the ‘Problem Bear’, because it took a large team of bear hunters, wildlife experts and dogs to hunt him down in a span of two long weeks. He was eventually shot down on the Bavarian government’s order to prevent him from breaking into people’s houses and posing danger to their lives.

To commemorate the harsh reality and inevitable connection between humans, animals and nature, Ishizawa’s one-of-a-kind creation came to be.

The plush bag is so realistic that it even has a bear head attached at the top. The exterior of the bad is covered black faux fur, with soft pink lining on the inside for comfort. Just like regular sleeping bags, it comes with a zipper that connects from the toes until the mouth of the bear.

All you need to do is get into the bag and zip it up and voila, you’ve transformed yourself into a hibernating bear who most likely wouldn’t enjoy being woken up by humans.

It’ll surely be a great camping must-haves as you can trick your unsuspecting friends into believing an actual bear has invaded into their tents.

However, be sure to not go around wearing it as an outfit, especially in the forest or jungle. You certainly don’t want to be shot down by a forest ranger who mistakes you for the mighty beast.

The design was released in 2007 and was priced at $2350. At 190cm tall the sleeping bag without a doubt looked too good to be true. According to Oddity Mall, Ishizawa only takes batch-by-batch orders via email as the product is not commercialized for the masses just yet.

Though ‘The Great Sleeping Bear’ is likely to burn an irreparable hole in you pocket, it’s sure to level up your sleeping game.